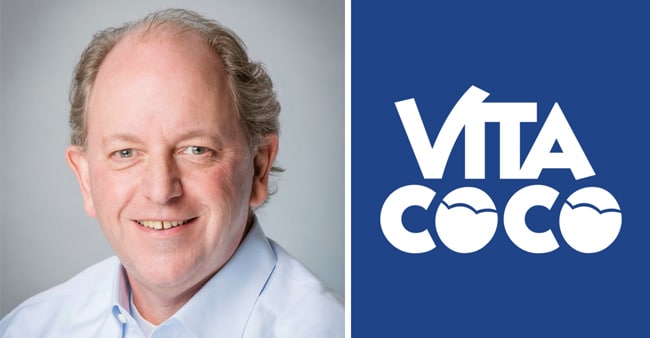 All Market Inc., the maker of Vita Coco, announced today that former Boston Beer Company president and CEO Martin Roper has joined the company as its president.

Roper — who spent 23 years at the craft brewing giant, including 17 as CEO before departing in 2018 — will oversee “operational and executional priorities,” the company said in its announcement. Roper is All Market’s first president since 2015, when Jeff Popkin resigned from the position leaving CEO Mike Kirban to assume his domestic sales and operations duties.

In an emailed response to questions, Kirban said that “the business has drastically changed” since 2015, noting that the company has “become more global” and has expanded its product portfolio with brands such as natural energy drink Runa and sustainably packaged water Ever & Ever.

“I think I’ve done a pretty good job building the Vita Coco brand for the past 15 years and developing and implementing our long-term strategy, but as an entrepreneur, I know my strengths and weaknesses,” Kirban told BevNET. “We’re at a stage where we really need a true operator, someone who can focus on driving our operational and executional priorities, to take the business to the next level. And Martin is a proven operator.”

During Roper’s tenure at Boston Beer revenues quadrupled and the company expanded its portfolio with brands including Twisted Tea, Angry Orchard, and Truly Hard Seltzer. Roper’s resignation came at a time when increased competition from startup breweries resulted in several years of slowing growth as Boston Beer ceded market share to smaller companies. Following his departure in 2018, founder Jim Koch credited Roper with “the creation of [the company’s] culture,” calling him “the smartest guy I ever met.”

Since leaving Boston Beer, Roper has served as an independent board director for beverage alcohol management firm Fintech and earlier this year became a board member of protein bar brand Power Crunch.

Kirban complimented Roper’s track record of scaling Boston Beer from a single base brand with Samuel Adams into a diversified portfolio company. Kirban added that he believes the two will have a close working relationship, noting Roper’s experience working under a founder-led company with Koch.

Kirban said that moving forward, he intends to focus his own time on brand building and long-term strategy while Roper will focus on scaling the Runa and Ever & Ever brands, alongside the core Vita Coco business.

“In ways, it’s very similar to the challenge here for [All Market Inc.] – how do we scale our innovations and grow our portfolio beyond our flagship brand, Vita Coco?” he said. “So, I feel confident Martin’s experience and proven leadership will add immense value to the business.”