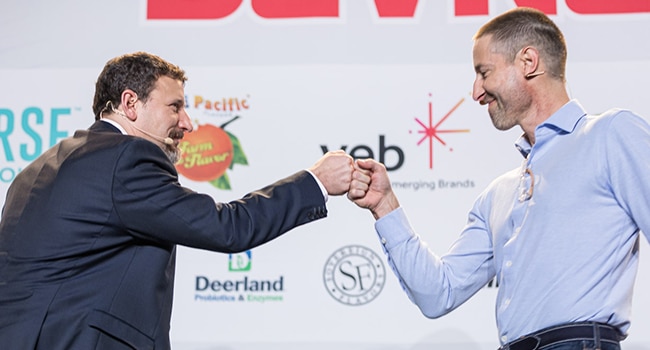 After a day spent exploring the development of broader trends, challenges and imperatives in the beverage world, the second day of BevNET Live Winter 2019 looked back towards the entrepreneur, offering lessons and insights on how brand leaders can grow on both a professional and personal level.

The main stage program kicked off with a conversation between Vanessa Dew, co-founder and chief sales officer at Health-Ade Kombucha, and Perteet Spencer, VP of CPG & enterprise sales at SPINS. The discussion focused on how Dew and Health-Ade have leveraged data effectively and efficiently while expanding beyond natural retailers. In today’s market, Spencer said, omni-channel shopping, digital marketing and specialization has helped fuel the rise of micro-brands with unique value propositions. To reach those hard target consumers, brands like Health-Ade need to leverage analytics more than ever. As a result, Dew said, the kombucha brand has shaped its strategy (and team) around serving those needs.

As co-founder of CAVU Ventures, Clayton Christopher has seen innovative and ambitious brands in the group’s investment portfolio, including Health-Ade, up close. His presentation outlined key lessons from those experiences. Brands in an early growth stage in which working capital is limited, he noted, should scale cautiously; he advised against “spending real consumer marketing dollars outside of stores” until reaching strong ACV, and also encouraged brands to patiently win in their backyard first to avoid overextending themselves too quickly.

Beyond business tactics, however, Christopher emphasized the importance of a commitment to personal development. In the increasingly fast-paced commerce arena, the value of focus and attention is higher than ever, and entrepreneurs need to intelligently manage that attention to be successful. 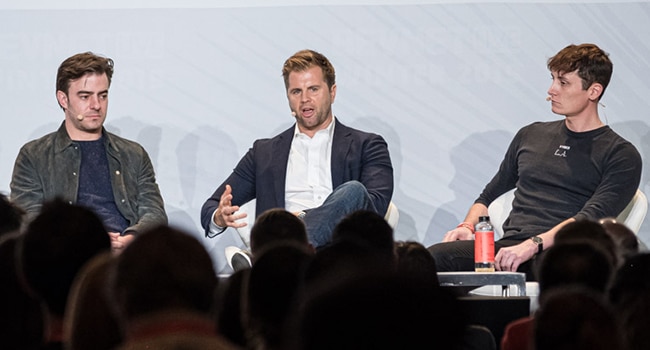 Following Christopher, founders and leaders from three brands having a major impact on the burgeoning CBD market — Benjamin Witte, founder and CEO of Recess; Jonathan Eppers, CEO and founder of VYBES; and Joey Cannata, president and COO of Daytrip — sat down to talk about the race for distinction in a highly competitive new category.

A core theme of the presentation focused on how brands are uniting to present a more unified voice within the conversation around CBD and hemp regulations. Witte, Eppers and Cannata revealed that they have had discussions as a group with the California Cannabis Control Commission to try to move the conversation forward regarding CBD in beverage products. The group is also working on a white paper aimed at providing some of the scientific research and analysis that is much-needed within the category. While acknowledging the difficulty of predicting when, Cannata predicted that CBD regulations would be similar to how Canada’s legalization of taurine opened up mass consumer acceptance of the previously unavailable ingredient in the country in relatively short order.

The three also underscored what makes them different. Recess, Witte explained, has consciously steered away from emphasizing hemp extract as an ingredient and instead focused on creating strong emotional messaging around the brand, offering consumers a chance to take a break during a busy day. In contrast, Eppers noted that he has fully embraced CBD as the showcase ingredient for VYBES, positing that consumers will pay a premium price for “CBD that works.”

After a lunch break, the second half of the day’s program began with Matt Bachmann, CEO and co-founder of Wandering Bear Coffee. Though the brand’s products are sold in multiple channels, he said calling Wandering Bear “omnichannel” doesn’t quite capture the full nature of its strategic approach.

At a time in which consumer attention is at a premium and retailers have acquired more influence over brands, Bachmann said his brand’s priorities were carving out distinct routes to consumers’ homes and offices. In the early days, without money for slotting fees or brand ambassadors, he turned to office service, offering customers to sign up for a pre-paid eight-week subscription plan. A year later, he launched online through FreshDirect, followed later by shifting into brick and mortar retail.

The cumulative effect was not only a diversified business, but channel itself becoming “the most powerful way to differentiate.” To serve those channels, Bachmann said, brands need to focus on each one’s specific needs and requirements and adapt to them, executing synergies whenever possible. 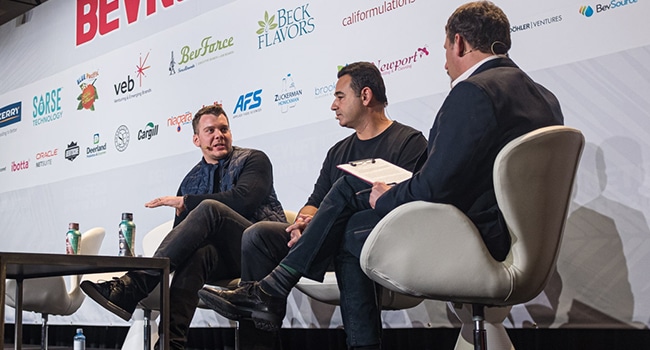 Plant-based protein brand OWYN was named a Rising Star at BevNET Live Winter 2019 yesterday, and today company president Mark Olivieri shared some of outlook on how to best dial in on brand and channel strategy.

In OWYN’s case, that movement is allergy-safe food and beverage. In clearly identifying what the brand stands for, Olivieri said, it has identified a specific consumer audience with a specific need that offers an opportunity to create strong customer loyalty at an early stage. That fits with his outlook that brands should “take sides” rather than solve problems, creating a deeper emotional resonance than simply providing a need.

Lane noted how over the past decade there has been a shift from M&A activity to capital raises. With major companies now getting more involved, the strategic buyer landscape has expanded — and should continue as multinational beer and spirits corporations in particular pay more attention. However, priorities have changed as well; Lane said strategics will expect brands to be ready to play outside of just natural retailers out of the gate, and are placing a greater emphasis on profitability.