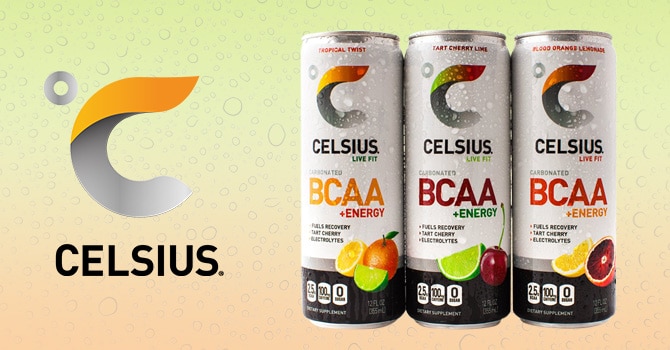 Fitness energy drink brand Celsius is entering the final months of 2019 with a flurry of activity, including introducing a new recovery beverage, launching a nationwide marketing tour and acquiring one of its European distributors — all moves that CEO John Fieldly said put the brand closer to achieving a $100 million run rate.

The Boca Raton, Florida-based company recorded $16.1 million in revenue during Q2 of this year, a 73% year-over-year increase from the same period in 2018. This fall, Celsius will introduce BCAA Recovery, which contains branch chain amino acids, as its latest innovation. The line — available in Blood Orange Lemonade, Tart Cherry Lime and Tropical Twist flavors — also includes tart cherry, Vitamin D3, electrolytes and 100 mg of caffeine per 12 oz can.

Speaking with BevNET last week, Fieldly said the BCAA line allows Celsius to serve a different function, recovery, that its consumers had been asking for. The line will be available primarily through the fitness channel, including a national rollout at Gold’s Gym locations, before expanding to other retailers.

“It’s all about expanding use occasion,” he said.

According to the company’s Q2 earnings report, European revenues increased 119% to $1.7 million during the period. The company recently made an investment aimed at supporting that market when it acquire Finland-based distributor Func. That deal also included a portfolio of health and wellness CPG brands, including protein snacks, smoothies and RTD products. Fieldly said the deal allows for immediate distribution in 3,800 drug store outlets in Europe.

“We see it as a beachhead for further European expansion,” Fieldly said, adding that the company has no current plans to actively acquire more foreign distributors. “This allows us to capitalize on the health and wellness trends in Europe, which are the same ones we are seeing in North America.”

Last month also marked the beginning of Celsius’ major experiential activation campaign called the LiveFIT Tour, which kicked off in New York City. The events, which will be hosted in 13 other U.S. cities throughout the rest of 2019, seek to bring Celsius closer to its key consumer base of fitness enthusiasts and active consumers through group workouts, specialized training and competitions. The inaugural New York LiveFIT Tour event also served as a showcase for the brand’s presence in the city; Fieldly said the activation was supported by local distributor Big Geyser, and also marked Celsius’s entrance into 7-Eleven stores in the city.

Those distribution gains are individual pieces in Celsius’s larger goal of building a nationwide DSD network over the next 12 months, a target Fieldly said the company is on track to hit. So fart this year, the brand has closed deals with over 30 independent bottlers in the Keurig Dr Pepper (KDP), Anheuser-Busch (AB) and PepsiCo systems. Fieldly noted that recent nationwide chain authorizations — including Target, CVS and Rite Aid — indicate that retailers are “understanding the need to change energy sets for today’s consumer,” including offering products that appeal outside of energy’s core male demographic.

“We are really excited about where we are as a company, about taking advantage of the overarching macro trends we are seeing,” he said. “The window of opportunity is now.”