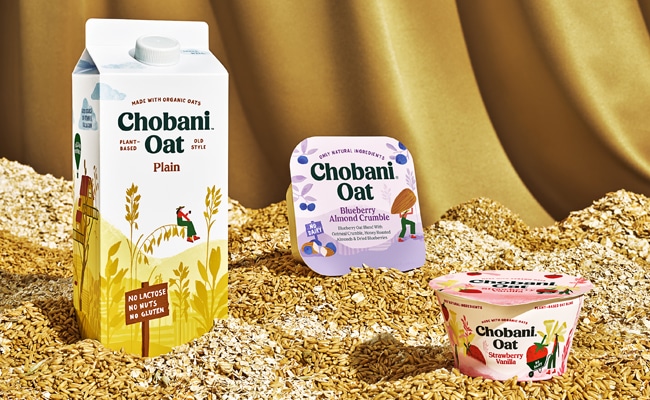 With eyes on expanding beyond the yogurt set, Chobani today announced the launch of a range of new both dairy and plant-based products, including its entry into the fast-growing oat “milk” category.

In December, the Norwich, New York-based Greek yogurt maker will introduce Oat Drink Barista Blend, a dairy free milk formulated to behave similarly to whole milk when blended with coffee or tea. The product, which will be targeted towards on-premise accounts, is the first in a line of new product innovations — including oat drinks and two different types of spoonable oat-based yogurt, as well as a dairy based coffee creamer — set to roll out over the early months of 2020 aimed at helping Chobani continue its evolution towards becoming a “modern food company” with products in a variety of categories.

“Like yogurt, oats are an ancient food with deep roots in our culture and our land. These grains deserve to be celebrated,” said Chobani founder/CEO Hamdi Ulukaya in a press release. “I always knew our journey from yogurt to becoming a modern food company would be through nutritious, delicious, batch-made products like Chobani Oats, and today they’re helping us further deliver on our founding mission of making better food for more people.”

Following the debut of Barista Blend in December, Chobani Oat Drinks — available in Plain, Vanilla, Chocolate and Plain Extra Creamy varieties with a suggested retail price of $3.99 per 52 oz. carton — are set to launch in January 2020.

The organic-certified oat drinks will take Chobani into an exploding segment of the plant-based milk market; As dairy milk sales continue to slide, oat milk sales grew 32.5% year-over-year through August 2019, according to data from Nielsen. The segment, pioneered by Swedish brand Oatly, now includes a variety of large conglomerates and independent players including Danone White Wave, Califia Farms, Mooala, Happy Planet, Elmhurst, Planet Oat and Pressed Juicery, among others.

Chobani Oat Drinks — available in Plain, Vanilla, Chocolate and Plain Extra Creamy varieties — will launch in January with a suggested retail price of $3.99 per 52 oz. carton. 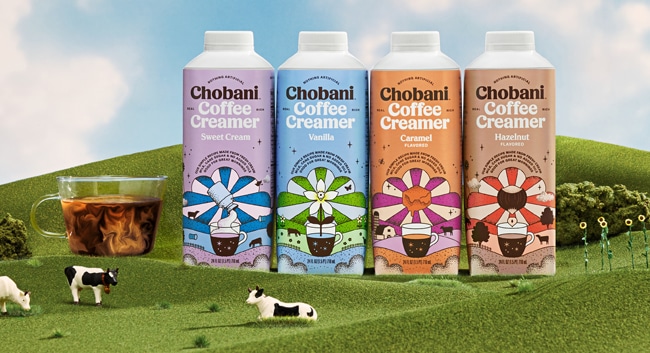 While going deeper into plant-based products, Chobani is also innovating within dairy. The company announced a four-SKU line of non-GMO dairy based coffee creamers that will retail for $3.99 per 24 oz. bottle. The products, available in Vanilla, Caramel, Hazelnut and Sweet Cream flavors, are made with fresh cream, cane sugar and no added oils.

The launch of Chobani Oat Blend and Oat Blend with Crunch marks the company’s second venture into plant-based yogurt, following the introduction of coconut-based spoonable and drinkable yogurts in January. A company representative confirmed that line will continue to be sold in stores, but will change its name from “Non-Dairy Chobani” to “Chobani Coconut” to distinguish the product from the brand’s new plant-based offerings.

With the exception of Greek Yogurt with Oatmeal, which will be produced in New York, all of Chobani’s new innovations will be manufactured at the company’s Twin Falls, Idaho, facility.