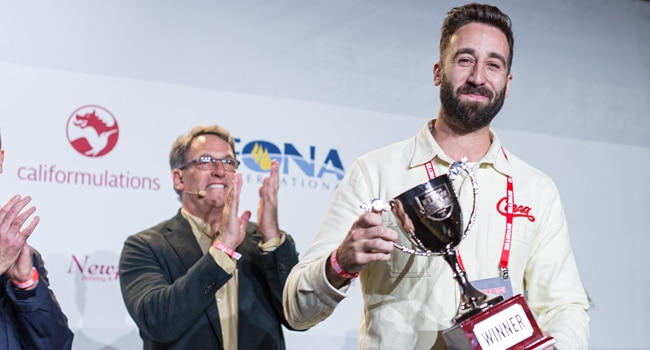 The California-based brand, which pitched itself as a better-for-you alternative to carbonated soft drinks, beat out five other beverage startups in the competition, which was sponsored by The Coca-Cola Company’s Venturing and Emerging Brands unit (VEB).

Speaking to BevNET CMO Mike Schneider afterwards, Corsa founder and CEO Matthew Kornberg said he appreciated the feedback he received from the judges and plans to implement changes to the brand in the coming months based on their response.

During his pitch, Kornberg said he modeled Corsa’s flavor profiles after colas, Italian amari and cocktail bitters. Each SKU represents a different nostalgic theme, including Kola (1950’s Americana), Spritz (1960’s Italian pop culture) and Cays (1970’s Caribbean spice). The brand launched in July and is available in retailers including Erewhon, Equinox, and Cafe Gratitude and is currently in discussions with Whole Foods for a 2020 test launch.

Speaking with BevNET, Sadowsky said Corsa was “clever,” “brand forward” and that he appreciated that the brand went for a simple better-for-you message instead of over-complicating the product with functional ingredients.

“I thought they were focused on what they are, which is just refreshment,” Sadowsky said. “I thought they kept it simple whereas some of the competitors were too confusing, or too functional, or less ready for prime time than Corsa.”

The finalists were selected from a pool of 12 brands which competed during the semifinal round of the Showdown yesterday. First round competitors included Beauty Gourmet, Bhoomi, Fourplay Superfoods, Humblemaker Coffee Co., Kafina Energy and Upwell.

After the event, Rampolla complimented the branding, adding that he believed Corsa had a “clear, crisp, and bold, refreshing look.” He suggested that the company should simplify whether the brand wants to be a botanical drink or a sweet indulgence in order to provide a more direct message for consumers and retailers.

“I think they need to get clarity on the consumer base and clarity on the occasion,” Rampolla said. “Does it pair well with food? What’s the right distribution channel for them? Where do they have the best traction? And then iron that out and figure out what their formula is before they even consider scaling. After that scaling becomes a lot easier.”