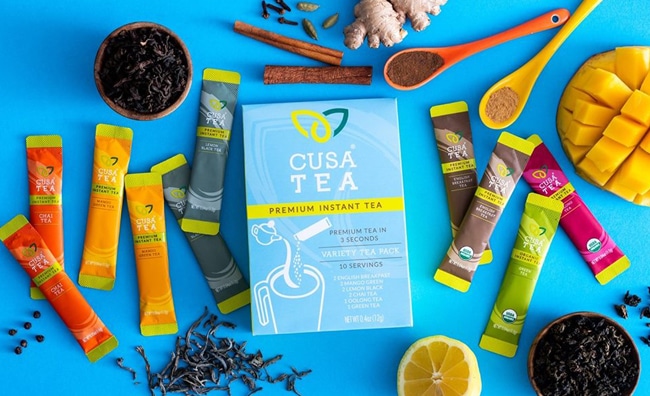 Launched in 2017, Cusa markets single-serve packets of organic instant tea made using a patented cold-steep process. The investment brings Cusa Tea’s total funding to $3.6 million, according to a press release. Existing and new investors, including Organic X Labs, Smart Capital and Service Provider’s Capital also participated in the round.

The investment is Break Trail Ventures’ first in a food or beverage brand. The fund, which has offices in Boulder and Columbus, Ohio, has a broad portfolio of technology platforms and consumer products. S Cap is a New York-based investor focused on food, beverage and clean technology companies. Cusa Tea is its third investment, following snack brand Libre Naturals and “blenderless smoothie” maker Bright Greens.

As part of the deal, Jay Hirsch, managing partner at Break Trail, and James Cali, general partner at S Cap, will join the board of directors at Cusa.

“Break Trail Ventures is excited to collaborate with and support Cusa Tea as they continue to scale the brand and redefine what it means to be an instant beverage,” said Hirsch in a press release. “They have an incredibly strong brand with a great shelf presence that is shaking up the tea space. Cusa Tea removes the sacrifices that usually come with any instant product by delivering for customers a better, more consistent and more convenient cup of tea.”

Cali also praised Cusa Tea for creating “the potential for disruption across the broader healthy beverage market” through its patented process. “We see huge potential for Cusa as a platform extending its reach in the broader functional and refreshment beverage space,” he said in the release.

Speaking with BevNET earlier today, Cusa Tea founder Jim Lamancusa said that, in addition to the funding, each of the lead investors will bring needed expertise in different key areas of the business. For S Cap, that means providing a combination of sales, marketing and operational knowledge to complement Lamancusa’s own background in sales and marketing. With Break Trail, it means partnering with another Boulder-based brand that he described as “an incredible cultural fit” and that is “focused on the cross section between the outdoor industry and food/grocery.”

Lamancusa said the new funding will go towards supporting distribution growth, as the company sets its sights on entering an additional1,600 doors by the end of this year, which would bring its total presence to 3,000 stores. The brand recently launched at 200 Safeway stores in the Southwest region and will enter Vitamin Shoppe locations nationwide in September.

The money will also go towards the development of new products — some of which will be functional teas and other which will take Cusa outside of the category for the first time. Without revealing what those might be, Lamancusa said the company’s patented production process can be used on “almost anything that you can drink,” and that new, non-tea products will be launched by the end of this year.

Finally, the company will also seek to bring in new talent this year. Lamancusa said his next step will be adding three to four new full-time employees by the end of 2019, with operations manager and VP of sales roles being the top priorities.