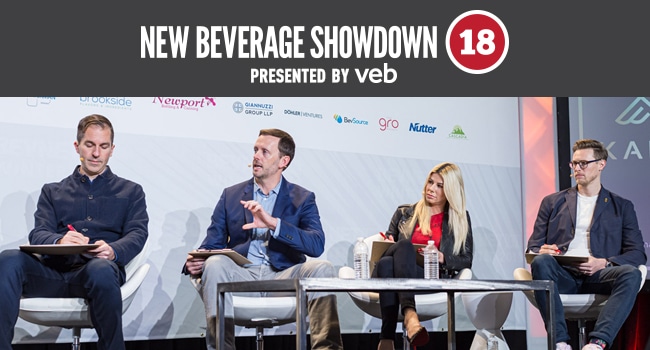 Six beverage brands emerged from a field of 12 contestants to lock down a place in tomorrow’s final round of New Beverage Showdown 18 at BevNET Live Winter 2019 in Santa Monica today.

While offering different types of drinking experiences, the contestants all reflected some of the major beverage trends that are shaping the market, including gut health, energy and adaptogenic ingredients. According to Schneider, the wide range of different production positions and the strength of the pitches made NBS 18 one of the most competitive ever.

“We looked at a lot of different factors including the liquid in the bottle, packaging, market opportunity, the pitch itself — and great taste, as usual,” he said. “I’m proud of all the founders who got up on stage and delivered their pitch. They all had awesome liquids and mature packaging, and it made our decisions very difficult.”

VEB served as the official sponsor of New Beverage Showdown 18.

As previously noted, the winner of New Beverage Showdown 18 will be crowned tomorrow, December 10, at the conclusion of BevNET Live Winter 2019, joining past New Beverage Showdown champions such as HopTea, CANN, RISE Brewing Co., and Mother, among others. The judges’ panel for the finals includes BevNET CEO John Craven; Kellam Mattie, VP of marketing and innovation at VEB; Ken Sadowsky, advisor, Verlinvest; Mark Rampolla, managing partner at Powerplant Ventures; and Julie Terrazzino, senior category manager for beverages at KeHE.