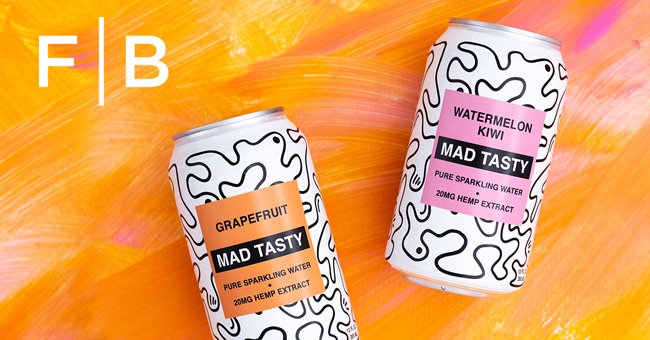 First Beverage Group is getting into the CBD business with today’s announcement of its investment in Mad Tasty (stylized as MAD TASTY), a line of infused sparkling waters backed by Interscope Records recording artist Ryan Tedder, lead singer of the group OneRepublic.

Financial details of the investment were not disclosed. As part of the deal, Tedder retains majority ownership of Mad Tasty, while First Beverage will have the ability to make further investment in the company in the future.

“We have been eager to invest in this space but we were determined to wait for the right opportunity,” said First Beverage founder and CEO Bill Anderson in a press release. “We believe Mad Tasty is positioned for explosive growth and are very excited to partner with them.”

In a press release, Tedder said Mad Tasty was partially inspired to launch the brand by his own struggles with dehydration and anxiety attacks.

“Americans have an epidemic of dehydration and too much coffee and stress – I wanted to tackle all of it for ME – with one beverage and without sugar,” said co-founder Ryan Tedder. “I also had countless friends and family around me experiencing and exclaiming the health benefits of hemp extract. Having battled anxiety and panic attacks myself in 2017, I started using hemp extract and wanted a way to take it every day without the terrible taste of existing beverages on the market.”

Speaking with BevNET on Tuesday, First Beverage managing partner Jack Belsito said that the group explored “the entire landscape” of cannabis products, including THC-infused drinks, before deciding to focus on just CBD. He noted that the firm doesn’t typically invest in brands pre-launch, but its belief in both Mad Tasty’s brand equity and the category’s rapid growth prospects was impetus enough to get involved earlier rather than later.

Belsito also noted that Tedder’s passion for the project — along with potential synergies with Interscope, including the potential some of the label’s other artists and resources could bring to the brand — helped push the deal over the line. First Beverage had been in ongoing discussions with Interscope about “several potential opportunities to collaborate on a brand,” he said, before the label broached the possibility of working with Tedder on Mad Tasty.

“(Tedder) brings a lot to the party, not just in his ability to sort of communicate en masse but really as a visionary for the brand,” he said. “He’s got a band that tours around the world, he appears on the Today Show, he’s got his own on NBC on Tuesday nights called ‘Songland.’ He’s a visible character and, combined with Interscope’s ability to breakthrough on the event level — whether it’s Coachella, SXSW or any of those arenas that they bring a big party to — we now can be involved with them on that. We think that’s a real advantage in a crowded field.”

Like others in the nascent CBD category, Belsito said Mad Tasty will take scale incrementally, starting by seeding with retailers in key markets like California and Texas.

“We see that behavior being very consistent with refreshment beverages in general,” he said. “We see a reasonably traditional approach here. It’s going to look a lot like a soft drink or a non-carbonated product. It’s going to grow in DSD to some level of account acceptance, and at some point the chains will come in and we’ll decide how to go route-to-market with them. Right now we are using third-party DSD in a couple of markets basically to launch the product in a way that we can be successful, and then we’ll build from there.”