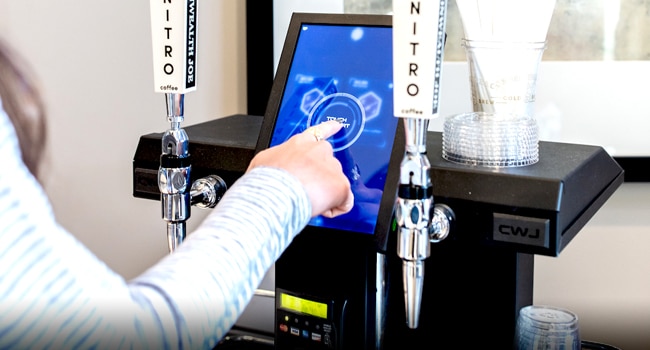 Thanks to new technology, Mid-Atlantic coffee brewer and cold brew keg provider Commonwealth Joe thinks it may have found the answer to overcoming the high upfront costs of keg placement: pay-as-you-go.

The Arlington, Va.-based company, which roasts, brews and provides kegs of cold brew to clients on the East Coast, is one of several partners across the country working with Smart Beverages Technologies (SBT) as a provider of the company’s Kegerator Vending Machines (KVM), an innovative self-serve concept that aims to address one of the major hurdles to cold brew providers.

“The number one reason why people say ‘no’ to buying our product is cost,” said Commonwealth Joe CEO Robert Peck.

For a company like Commonwealth Joe, which has primarily serviced office accounts since launching in 2012, the KVM is an opening to a more flexible business model. Traditionally, Commonwealth Joe charged offices upfront for full kegs, which were then given out to employees as a free perk. Instead, the KVM allows Peck’s company to collect revenue directly on a pay-per-pour basis at no cost to the provider; users simply swipe a credit card and go. By removing one of the major barriers to entry, the idea is that new placement opportunities — in locations such as gyms, apartment buildings, convention centers and college campuses— will begin to open up.

“A lot of locations reach out and ask if there’s a way to cost share with our gym members or our residents — and we’d say we wish we did but we don’t,” said Peck. “One of the reasons that the vending was so exciting is it allowed us to reach those new customers.”

In San Diego-based SBT, Commonwealth Joe found a partner that was also eager to leverage technology to expand its presence in cold brew. Coming from the company’s experience developing hot food vending machines and other self-service platforms, SBT CEO O’Neil Sawh said the lack of viable options in the keg service model left him “shocked.”

“It was confusing for us because we had been running kiosk businesses where we would see and track everything online,” Sawh said. “I’m not sure how you can scale to hundreds or thousands of locations and not have visibility on the keg, in terms of pressure and liquid levels. The basic insights on each device wasn’t [there] in this industry.”

The trick, according to Sawh, was how to turn the machine into a scalable and commercially viable platform. For that, the company installed real-time monitoring of its KVM units from a centralized dashboard, where it can anticipate issues, respond to problems, and use customer data to enhance service. Other features, such as automatic keg reordering, are also in the works. The company currently has 250 KVM units in operation nationwide. “If a driver goes to a location to change a keg and there’s 100 oz. left, you’ve lost one-sixth of the value of the keg,” Sawh said. “You do that to thousands of accounts, and it’s a lot of money. Just off that, we knew off just that we would have a business.”

Having such a fine level of control has also allowed providers to get creative with the KVM.

“We do have the ability to remotely adjust prices at will, which opens up some additional business models,” Peck said. “For example, when a customer of ours with multiple locations has a cold brew happy hour, we can change the machines to be free for employees after 10 a.m., so the company pays for it.”

In partnering with Commonwealth Joe, Sawh said the company’s team and corporate structure convinced him to grant the coffee roaster an exclusive license to use KVM east of the Mississippi River. However, he said the company was not seeking to make more exclusive agreements in the future; SBT also works with wholesalers including Blackbird Beverages, NOBL Coffee and Kombucha On Tap.

For Commonwealth Joe, leaning into new dispensing technologies that work in different channels was also good business sense; Peck acknowledged the move to secure an exclusive license with SBT was, at first, “more about defense” and protecting Commonwealth Joe’s existing customer base from rivals who might also be interested in the technology.

Working with the kegerators also brings challenges for a small operation; Peck said the company has had to take time training team members on how to use the machines, and initially leaned heavily on SBT for guidance. The units are expensive ($5,750), heavy (175 lbs. with an average size commercial kegerator), and can be cumbersome for a single delivery driver to move.

Yet Peck believes the platform has plenty of room to grow. The company currently has 40 KVM units in operation in New York and the District of Columbia, and recently began offering kombucha from GT’s and Marin Kombucha in addition to its own cold brew. As an indication of its commitment to fueling growth through KVM technology, the company recently closed $1.2 million on a $4 million funding round. It is also moving into new beverage categories, servicing GT’s Kombucha.

“The thing that is really nice about the vending is that you can sell for 25 to 40 cents an ounce,” Peck said. “When you are selling full kegs, you aren’t getting nearly that. The margins on the vending are much better, and the equipment is also much more expensive. We think there’s enough there to justify the vending, but it also depends on how much consumption there is.”