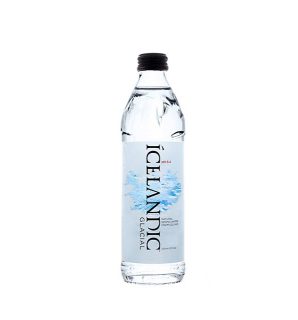 LOS ANGELES– Icelandic Glacial has announced that it will serve as the official water for the 77th Golden Globes Awards Ceremony. The naturally alkaline and sustainably sourced natural spring water will hydrate nominees and guests both on the red carpet and during the annual star-studded show. This marks the first time Icelandic Glacial has served as a Golden Globes sponsor.

“We are proud to be an environmentally conscious partner of the Golden Globes,” said Icelandic Glacial’s Chairman and Co-Founder, Jon Olafsson. “We pride ourselves on our outstanding achievement of being the world’s first certified Carbon Neutral bottled water for the past ten years, and look forward to sharing the purest tasting water on Earth with Hollywood’s finest.”

Icelandic Glacial will be available to guests upon arrival at the red carpet, with glass bottles featured on every dinner table during the televised award ceremony. Icelandic Glacial will also be exclusively available at all Golden Globes’ official events leading up to the big show. Produced from a spring that is so pure nothing is added or taken away, Icelandic Glacial possesses an exceptional balance featuring a naturally low mineral content and naturally alkaline pH of 8.4. Being the world’s first certified carbon neutral natural spring bottled water, Icelandic uses 100% natural green energy to fuel its production while maintaining a “net zero” carbon footprint.

“We are thrilled to partner with Icelandic Glacial to keep guests hydrated at the 77th annual Golden Globe Awards,” said Lorenzo Soria, president of the Hollywood Foreign Press Association. “For over 25 years, the HFPA has been giving back to the community, and the world, committing over $37.5 million in grants to nonprofits and humanitarian organizations.  We are thrilled that through this partnership, Icelandic Glacial will help us further our mission of doing good.”

Icelandic Glacial is the super-premium natural spring water, bottled at the source from Iceland’s legendary Ölfus Spring, which was formed more than 5,000 years ago and is shielded from pollution by an impenetrable barrier of lava rock. The spring produces water so pure that nothing is added or taken away. As a result, Icelandic Glacial possesses exceptional balance featuring a naturally low mineral content and a naturally alkaline pH of 8.4. Icelandic Glacial is further distinguished as the world’s first certified carbon neutral natural spring bottled water for product and operation. Icelandic Glacial uses 100% natural green energy to fuel its production delivering a premium bottled water to discerning consumers around the world while maintaining a “net zero” carbon footprint.

The Hollywood Foreign Press Association (HFPA) was founded in 1943 – then known as the Hollywood Foreign Correspondents Association – by a group of entertainment journalists based in Los Angeles. During World War II, the non-profit organization established a cultural bridge between Tinseltown and millions of cinema fans around the world who demanded drama and inspiration through entertainment. The HFPA continues to do so today with a membership representing more than 55 countries. Since 1944, the group has hosted the annual Golden Globe® Awards – the premier ceremony which honors achievements in both television and film. The licensing fees from the Golden Globe® Awards has enabled the organization to donate more than $37.5 million to more than 70 entertainment-related charities, film restoration, scholarship programs and humanitarian efforts over the last 25 years. For more information, please visitwww.GoldenGlobes.com and follow us on Twitter (@GoldenGlobes), Instagram (@GoldenGlobes), and Facebook (facebook.com/GoldenGlobes).