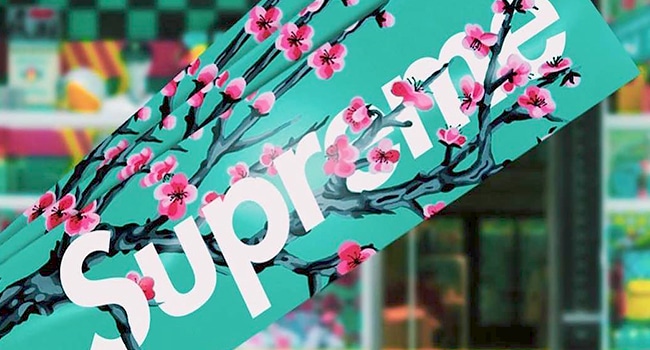 The Dream of the ’90s Is Alive in AriZona Iced Tea

The brand has withstood the test of time, somehow avoiding the trappings of trendy 90s nostalgia to become what Eater calls simply “a mood.”

Originally launched to compete with established iced tea brands like Snapple, New York-based AriZona got its name because co-founders Don Vultaggio and John Ferolito thought it had a more pleasant connotation than its East Coast home. According to Vultaggio’s sons, their mother created the can design, drawing inspiration from the Southwestern style of the family home.

Since its launch, Eater points out that AriZona’s vivid aesthetic has helped it to establish a spot in the streetwear world. The company’s online store features products from hats to fanny packs to retro t-shirts adorned with its signature pastel cherry blossom design, and it opened a 99-cent store pop-up in New York last year which sold clothes and skateboards. The brand even sponsors a skate team of which Tony Hawk’s son, Riley, is a member.

AriZona’s influence has also expanded to other food and beverage channels. The iced tea brand was inspiration for Other Half Brewing’s 99¢ Tea IPA and this month, Mission Chinese Food’s Brooklyn branch is running a special a “Great Buy” menu that features AriZona products in two entrees, a cocktail and a dessert. According to the New York Times, the menu includes Green Tea noodles with chicken, offered at $9.99, and a 99-cent dessert featuring an AriZona Grapeade gelatin adorned with AriZona fruit snacks.

The restaurant’s chef Danny Bowen told the Times the promotion will help the restaurant reach a wider audience.

“We already appeal to people in the food world, but I really wanted to reach, like, kids that are familiar with Arizona to branch out and try something different,” he said.

This week, sparkling water brand LaCroix announced a new flavor, the first addition to the lineup since September 2017’s Key Lime, as reported on Grub Street.

Last Friday, LaCroix posted a teaser photo of a dark pink can on the brand’s Twitter, asking followers to share their best guesses, which ranged from strawberry kiwi to dragonfruit to cotton candy. On Monday, the brand announced the new flavor would be hibiscus, stylized as “HI-Biscus,” and will launch in the Western United States.

Grub Street compiled some of the reactions from LaCroix lovers on Twitter, and the responses were lukewarm at best. Several were skeptical of a flower-flavored sparkling water, while others speculated that the name “HI-Biscus” was being used to denote that no real hibiscus was used in the product. Some East Coast residents were simply frustrated because they wouldn’t be able to try out the new flavor.

Mineral water brand Perrier USA even weighed in, responding to a less-than-thrilled La Croix customer who had hoped the new flavor would be watermelon, replying: “Thirsty? We’ve got melons.” 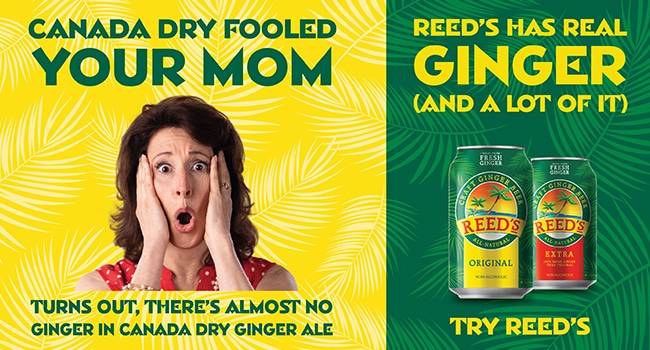 The “They Fooled Your Mom” campaign gets it name from mothers’ supposed dismay at discovering the lack of ginger in the ginger ale they give their children to settle their upset stomachs. The campaign points out that ginger isn’t identified as an ingredient in Canada Dry’s ginger ale, while each Reed’s 12 oz. ginger beer contains 3,000 to 9,000 mg of ginger. Reed’s website also links to an article on Bloomberg Law regarding Keurig Dr. Pepper’s $11.2 million settlement to resolve a class action suit disputing Canada Dry claims that the product is “made from real ginger.”

Lindsay Martin, Reed’s VP of marketing, told Ad Age that the company is aiming to garner attention by attracting the interest of Canada Dry consumers rather than facing off with ginger beer rivals like Gosling’s or Fever-Tree.

“We went to where awareness is,” said Martin.

She also told Ad Age that the brand’s vision is to be the “next generation ginger beverage.” Reed’s plans to introduce new hemp extract and zero sugar versions of ginger beer, along with ready-to-drink mules and ginger shots, later this year.

Quickly responding, Vita Coco tweeted “Address?” along with a photo of the brand’s community coordinator Lane Rawlings in a bathroom stall holding a Vita Coco jar containing what appeared to be pee.

Brand director Allison Finazzo confirmed to Vox that, despite Twitter skeptics speculating that the jar contained pineapple juice, it contained actual pee. She also said the tweet was a marketing stunt launched to support Vita Coco’s new Pressed Coconut Water, intended to taste more like actual coconuts than typical coconut water. The campaign, entitled “Impossible to Hate,” includes an initiative to call out the company’s critics on Twitter.

Finazzo said the company doesn’t take itself too seriously, and will continue using this humorous Twitter voice going forward.

“We all trust our instincts and know when something is toeing the line between provocative and inappropriate,” she said.

In response, Posnanski tweeted that he “got owned by coconut water” and told Huffpost that Vita Coco’s response was an “awesome comeback.”

While Finazzo said Posnanski did supply Vita Coco with his address, the company is sending him some of its new coconut water rather than a jar of urine.