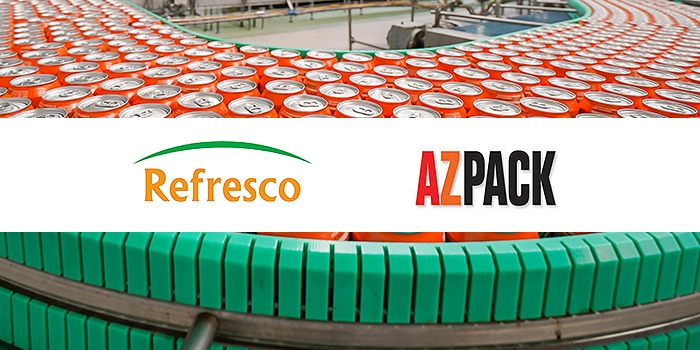 Founded in 1999, Refresco offers both private label and branded beverage co-packing services in Europe and North America across a range of categories. Speaking to BevNET, Refresco CEO Hans Roelofs said that the acquisition of AZPACK allows the company to cover a regional white space in its growing national U.S. network. Based in Tempe, Arizona, AZPACK operates out of a 240,000 sq. ft. facility with hot fill, cold fill and flash pasteurization capabilities.

Financial details of the transaction were not released, but the deal — which brings Refresco’s total number of U.S. bottling sites to 27, including locations in New Jersey, Florida and Oklahoma — is relatively modest compared to its purchase of Canada-based Cott Corp. for $1.25 billion last year.

“With AZPACK, we acquire some nice co-packing business mainly organized around branded customers,” he said. “We also acquired some good can filling capacity, which is something we’ve been investing in over the last 12 months.”

“We have grown our company significantly over the past decade, but recognize the need for a different and larger platform in order to continue to grow and thrive,” said Peter Reilly, co-founder of AZPACK, in a press release. “Both (co-founder) Dr. Wang and I will stay on as managers to support this next growth phase. Refresco is a very experienced beverage solutions provider and they value entrepreneurship and flexibility as much as we do.”

According to Roelofs, Refresco’s recent M&A activity in North America reflects the company’s strategy in Europe, where it has completed 29 acquisitions thus far. The overall mission, he said, is to consolidate global non-alcoholic beverage bottling and combine all volumes to drive efficiencies. Counting AZPACK, Refresco currently owns 66 production sites worldwide with a collective turnover of $4 billion, of which the Arizona business will represent “roughly 3 to 4%.”

Roelofs indicated that Refresco will continue to actively seek out value opportunities in 2020. With many of the former Cott bottlers located in the Northeast, he said Refresco will either shift some of its existing production capacity from north to south, or acquire capacity to fill demand in the West Coast, Texas and Florida. The company will also continue to prioritize expanding its can-filling capacity; the purchase of AZPACK includes machinery for producing up to 1 million conventional or slim 12 oz. and 16 oz. cans per day.

Beyond M&A, Refresco is bolstering its existing operations as well. On Wednesday, the company announced plans to add 75 jobs and to spend $12 million on equipment and infrastructure upgrades at its Fort Gibson, Oklahoma, bottling site, acquired in 2016.

“In general, we buy companies that are either privately owned, looking for new investment, or people who have problems with succession planning,” he said. “Now and then we have an opportunity to do a bigger deal. That’s what you will see us doing.”