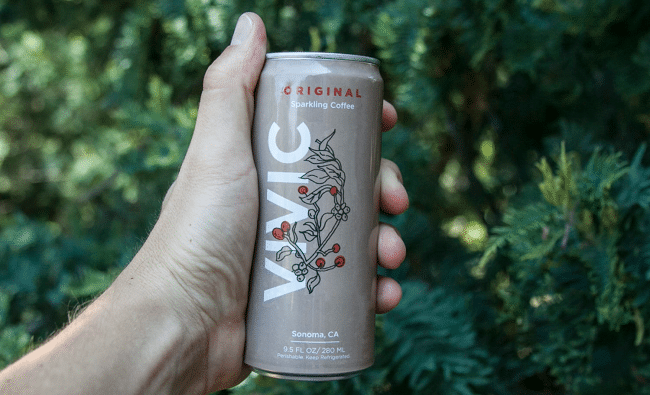 As the ready-to-drink coffee category continues to grow and innovate, California-based VIVIC launched last month with a line of sparkling coffees, which its co-founders hope will stand out with unique flavor profiles infused with roots and botanicals.

VIVIC was co-founded in 2018 by GacLife beverage developer Graham Gould and former chef and Looplocked Wines owner Louis Abruzzese. Speaking with BevNET, Gould said he first developed an early recipe for sparkling coffee in 2016 while working at Taylor Lane Organic Coffee, but his idea was shot down as “unproven” in the marketplace with “no clear data that people want this.” About six months later, he said, in early 2017 Stumptown Coffee Roasters launched their own line of ready-to-drink sparkling cold brews, a development he said gave him confidence in the concept and led him to start his own company.

Gould and Abruzzese cited the rise of nitro cold brew as evidence that consumers are seeking out new and innovative approaches to coffee, but Gould cast doubt on its longevity. He said sparkling has stronger potential to become an important space within the category, calling it “the most refreshing way to drink coffee.”

“We’re basically the missing link between your teas and your cold brews,” Abruzzese told BevNET. “We felt like coffee should be treated as an ingredient and developed a beverage keeping that in mind.”

Despite interest in the category from both established and startup coffee companies, RTD sparkling coffee is still a relatively new trend for U.S. consumers. Stumptown discontinued its sparkling line last year, telling BevNET that it was “an experiment.” In 2017, Chameleon Cold-Brew announced its own sparkling line which was produced for a pilot test, and last year High Brew attempted a line which founder David Smith said will likely serve as a summer seasonal variety. Smaller companies like Slingshot Coffee Co. and Clutch Coffee Roasters also already have sparkling coffees on the market, but position their drinks as “Soda” and “Pop” respectively.

But VIVIC has sought to distinguish itself as a low sugar, low calorie alternative with more refined flavor profiles than its competition. The line includes Original, Lavender, and Sarsaparilla flavors and retails for $2.99 per 9.5 oz can. Each can contains 30 calories, 8 g of sugar and are also sweetened with licorice root to keep the sugar level low and add additional gut health functional benefits.

“The fact that we are a low sugar product really is going to help us,” Gould said. “Consumers are becoming more and more aware of how much sugar they’re consuming, and I think that was one of the issues Stumptown had.”

VIVIC launched last month in 24 stores in North California, including Berkeley Bowl, Rainbow Grocery, and Driver’s Market. The brand has partnered with distributor Rock Island Refrigerated Beverage and is also developing a keg program to begin servicing corporate offices in Silicon Valley. According to Abruzzese, the company plans to focus on building in the San Francisco Bay Area this year, but hopes to launch soon in Los Angeles and later New York.

VIVIC is also planning to launch three new SKUs this summer which are currently in development. Bringing their culinary backgrounds to the table, Gould and Abruzzese said they pride themselves on developing rich and unexpected flavors.

“I think it’s time for the industry to break down those barriers and experiment with flavors that work well with coffee that aren’t just traditional flavors,” Gould said. “So we look at our recipe development with a wider perspective, just pulling from different inspirations we encounter in our daily lives.”