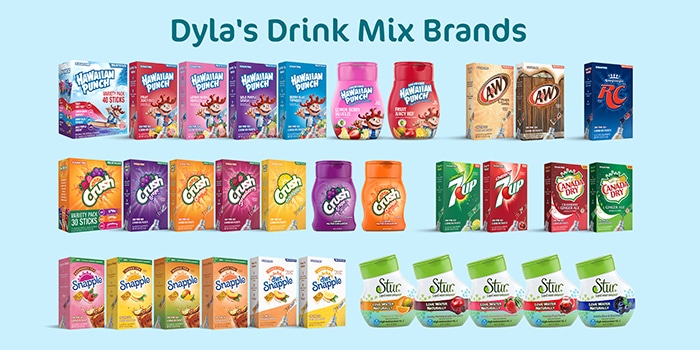 Through a long-term licensing agreement, Dyla Brands, the parent company of Stur and FORTO Coffee, has been overseeing marketing, manufacturing and sales for Keurig Dr Pepper’s (KDP) liquid concentrate and powdered mix products since late 2019.

Neel Premkumar, CEO and founder of Dyla Brands, told BevNET the agreement with KDP has been in effect for several months, but he was not authorized to speak publicly about the deal until after January 1. The two parties began discussing a potential partnership for the business during an annual planning session about how to grow the business overall; KDP has been a minority investor in Dyla since 2018 and distributes FORTO and Stur through its allied brands portfolio.

The end result has brought KDP’s 20-year-old, $100 million liquid concentrate and powdered mix business — which includes products from Snapple, Hawaiian Punch, Canada Dry, 7Up, Crush, A&W and RC Cola — under the Dyla banner. KDP will retain control of the brand names and trademarks.

Premkumar said Dyla had quietly spent much of 2019 preparing to take over operations for KDP’s liquid concentrates and powdered mixes. The company invested “several million” dollars in manufacturing upgrades to boost capacity at its partner facility, which has been producing KDP products for the last six months, and will be hiring additional sales staff to sell those lines into national accounts. Those brands have been integrated alongside FORTO and Stur; under Dyla’s structure, “the same people are working on everything,” he said.

The products themselves have also been overhauled, with all 60 SKUs across all seven brands receiving upgrades in formulation and packaging. Snapple and 7Up will be available as liquid enhancers for the first time ever, and RC Cola for the first time as a powder mix. The powders will be available in 6-count and 8-count boxes, while the liquid concentrates will be sold in 14-serving and 24-serving sizes.

“The feedback we heard from consumers was that they wanted (the products) to taste more like the ready-to-drink versions,” he said. “Our entire focus was on upgrading the taste to get closer to the RTD, but in almost every case without adding sugar.”

The new brands share obvious synergies with Stur, the all-natural liquid concentrate line launched as Dyla’s first brand. According to data from IRI, Stur generated $10.3 million in total U.S. multi-outlet sales through December 29, 2019, a 21% increase year-over-year. At retail, Premkumar said the company is leveraging the combination of both Stur and the KDP brands to command a bigger presence on endocarps and displays. Yet the bigger opportunity may lie in e-commerce, where KDP’s presence is weak and where Stur does about a quarter of its business, according to Premkumar.

“We’ve got a couple hundred thousand consumers on a regular subscription basis (for Stur), so we’re going to start cross-selling customers into buying consistently more of these mixes.”

The licensing agreement brings Dyla closer with KDP, which became an investor and partner in the brand in 2018, followed by a further $20 million investment last March. However, most of the attention thus far has been on FORTO, the fast-growing energy-coffee platform which includes both 2 oz. shots and full-size coffee drinks, each of which are distributed by KDP. In taking on the liquid and powder enhancers division, Dyla has become the second largest drink mix manufacturer in the country behind Kraft Heinz.