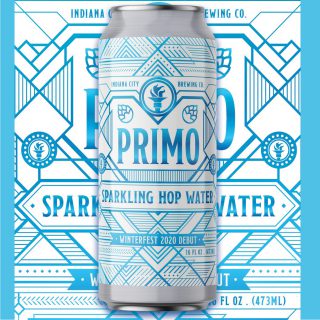 INDIANAPOLIS, Ind.— Indianapolis brewery, Indiana City Brewing Co., is introducing Primo, Indy’s first ever dry hopped sparkling water, to Indy’s biggest beer lovers at the 12th Annual Winterfest beer festival taking place at the Indiana State Fairgrounds this weekend. Brewery staff will hand out over a thousand complimentary pint cans to attendees at both festival sessions on Friday and Saturday in an effort to promote safety and responsible drinking while supporting the Brewers of Indiana Guild’s largest fundraiser of the year.

Aside from the exclusive can release at the festival, Primo will premier on draft at the Indiana City taproom located on the East side of downtown Indy at 24 Shelby Street this Saturday, February 1. Customers can order Primo by the pint while the company plans for an official packaged release of their craft water in the early part of this year. Indiana City brews Primo to “compliment the craft experience” and sees this as a great way to introduce the fresh, pleasant characteristics of hops to people who don’t already drink beer.

“We love great beer and pushing the evolution of craft beer in Indianapolis” says Indiana City Founder Ray Kamstra. “Primo is craft brewed for life and is an extension of our mission to be innovative and creative, especially when considering the importance of being present in all aspects of our daily lives. Because it contains no alcohol, Primo gives hop-forward beer lovers the opportunity to enjoy so many aspects of the beer experience anytime, anywhere.”

Indiana City’s focus on amazing label artwork is nothing new and Primo is no exception. “For Primo, as with all Indiana City labels,” artist Aaron Scamihorn says. “We pushed to create a design that not only spoke to the style of beverage but hopefully stands out from what people typically see on the shelf. To celebrate the unique nature of this being the first hop water produced in Indiana, we pulled inspiration from Art Deco shapes and paired them with printing technique of metallic shapes set against a matte white backdrop. The result is a stunning visual that feels great in your hand.”

Indiana City Brewing Company is a proudly self-distributed brewery and taproom with a pre-Prohibition era vibe located on the East side of Downtown Indianapolis. Opened in 2013 by passionate homebrewer, Ray Kamstra, after a successful crowd-funding campaign, Indiana City has continued growing year after year adding to their year-round can series of beers, expansive and acclaimed barrel aging program, and continues to give a platform to local artists by debuting original artwork directly on their cans. By elevating craft beer in Indianapolis and now branching out to deliver a non-alcoholic craft beverage made by and for beer lovers, Indiana City hopes to reach even more people and brew even more great beer (and hop water) in the coming decade.