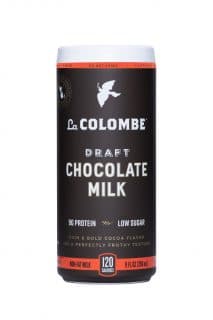 ANAHEIM, Calif.– La Colombe, the beverage industry leader in coffee innovation, will be highlighting an array of new flavors and concepts including BevNET’s Best of 2019 award-winning Oatmilk Draft Latte, as well the new Draft Chocolate Milk, at their booth at Expo West: Hall B, booth 1575.

“At La Colombe, we are obsessed with innovation, and always looking to find new ways for everyone to enjoy the drinks that we love to serve at our cafes,” said Todd Carmichael, CEO and Co-Founder of La Colombe coffee roasters. “This started when we were the first to market cold brewed coffee, and now we are turning our attention to chocolate milk, a classic flavor that needed a facelift – and a little texture; and dairy-free lattes with products that we believe are the best on the market.”

In 2020, the core flavors will be available in over 2,000 Kroger operated stores coast-to-coast, which include Kroger banner and non-banner stores such as King Sooper, Ralphs, Fred Meyer and Mariano’s. Additionally, over 7,200 Walgreens stores and over 250 HEB stores will be picking up the Draft Latte core flavors.

“Distribution is continuing to grow at record rates,” continued Carmichael. “With the addition of Walgreens and Target, among many others to our family of retailers across the country, 2020 is ramping up to be another stellar year.”

Over 1,500 Targets will also be joining the list of stores soon selling La Colombe. In early 2020 it will be picking up La Colombe’s newest non-dairy Draft Latte – Oatmilk Draft Latte. Finally, over 500 Target stores will be carrying La Colombe’s single-origin 42oz multiserve bottle.

The total ready-to-drink coffee category is $1.6 billion in annual sales,[2] and is growing at an average rate of 10% across all channels. In the grocery channel, La Colombe’s ready-to-drink beverages are one of the category growth leaders at +36%.[3] Since the inception of the Draft Latte in 2017, Draft Latte has gained over 55,000 points of distribution nationwide and has achieved more than 52% ACV (Total US MULO).[4]

For more information on Draft Latte, the nutritional value, or to find out which retailers is carrying the can, visit our website or follow our cans’ adventures across the United States using #DraftLatte.

La Colombe (lacolombe.com) is a leading coffee roaster known for ethical, long-term trade practices with growers. Considered one of the pioneers of the third wave of coffee, it provides signature classic blends and exceptional single-origin coffees to cafés, hotels, restaurants and retailers around the world. In addition, the company owns and operates 30 cafés in Philadelphia, New York, Chicago, Boston, Los Angeles and Washington, D.C. – with additional locations and new markets scheduled to open in 2020-2021. The company has also made headlines in the ready-to-drink business with its DRAFT LATTETM – the world’s first-ever textured cold latte.