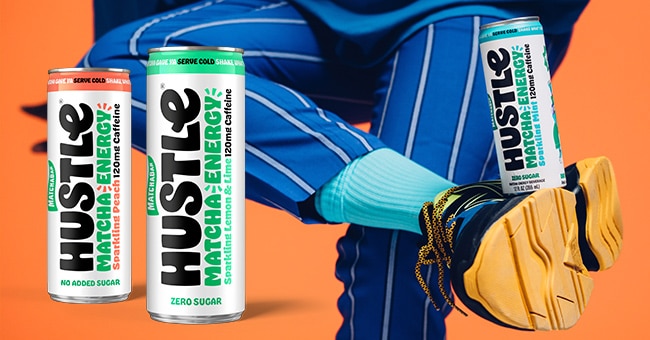 Two years after the launch of its sparkling energy drink Hustle, New York-based startup MatchaBar is introducing new branding and flavors for the line, now called “Hustle by MatchaBar.”

The revamped products will feature new labelling and be split into two product lines: Hustle Energy and Hustle Tea. Hustle Energy features two zero sugar flavors — the previously available Lemon & Lime and a new addition, Mint — and a new juice-sweetened Peach variety. The drinks contain 120 mg of caffeine per 12 oz. can. The brand’s flagship matcha tea line will feature new branding, but no other changes will be made to the line.

Speaking with BevNET today, MatchaBar co-founder and CEO Graham Fortgang said the rebrand comes as the company prepares for nationwide retail expansion, including launching at Walmart and at 300 Sprouts stores in Q1 and rolling out into 1,500 CVS locations in Q2. The company also expects to expand within existing accounts such as Whole Foods and Kroger.

Fortgang said he anticipates the rebrand will help MatchaBar products to stand out on shelf in conventional retailers, where matcha and other tea-based beverages can often lack eye-popping, lifestyle-oriented branding.

“Our understanding is that consumers feel hit over the head almost with a medicinal, prescriptive look and feel that has dominated the market for a while,” Fortgang told BevNET. “We want to create an emotional response, so our working definition of ‘Hustle’ is that it’s about the ‘pursuit of happiness.’”

Fortgang noted that Hustle is currently the MatchaBar’s top-selling item and that the company will lean on “better-for-you” messaging to drive growth. The brand will launch a fourth energy SKU this Spring, he said, and is also developing an additional product line to launch later this year.

According to Fortgang, the transition to Hustle also signals MatchaBar’s intent to compete more aggressively with established energy drink brands, such as Monster and Red Bull, by expanding its presence at music festivals, college campuses and community events.

“Why does an event like Coachella have vegan sushi, smoothies and acai bowls and have unbelievable craft beer options, but then they serve traditional energy drinks full of chemicals and taurine for young kids to drink?” Fortgang said. “In my opinion it will eventually become socially unacceptable to serve young kids these drinks. There’s a whole [better-for-you] wave coming and it’s really exciting to be at the forefront of it.”

The company worked with Jones Knowles Ritchie (JKR) creative agency to develop the new design. The agency has previously worked with food and beverage brands including Hippeas, Ugly, and Dunkin’ (spearheading the coffee chain’s decision to drop ‘Donuts’ from its name).

To support Hustle by MatchaBar, the brand plans to focus heavily on both social and experiential marketing; it recently secured the handle “@Hustle” on Instagram. The company is also tapping into its roster of celebrity investors, including “Bad Guy” singer Billie Eilish and music producer and DJ Diplo — both of whom invested in the company’s $8 million Series A round in 2018 alongside NFL linebacker Von Miller and actor Ansel Elgort.

Eilish and Diplo will be featured in Hustle by MatchaBar’s marketing campaign and will also be supporting the launch of the company’s direct-to-consumer subscription service this week. The musicians have previously worked the brand to host activation events during concerts and festivals and will also advertise merchandise giveaway campaigns and promote the brand’s sustainability initiatives.

“We really believe the one thing you can’t fabricate with any amount of money or VC funding is culture,” Fortgang said. “That’s the reason why when a celebrity invests in our business, they’re not just appearing in a launch video or campaign later but they’re following every stage of that journey…. If we’re able to create a narrative where the product doesn’t just show up in a press release or a photo with ‘hashtag advertisement’ attached, but they can actually become a part of our storyline, it seems authentic and that all stems from them caring and wanting to do business with us.”