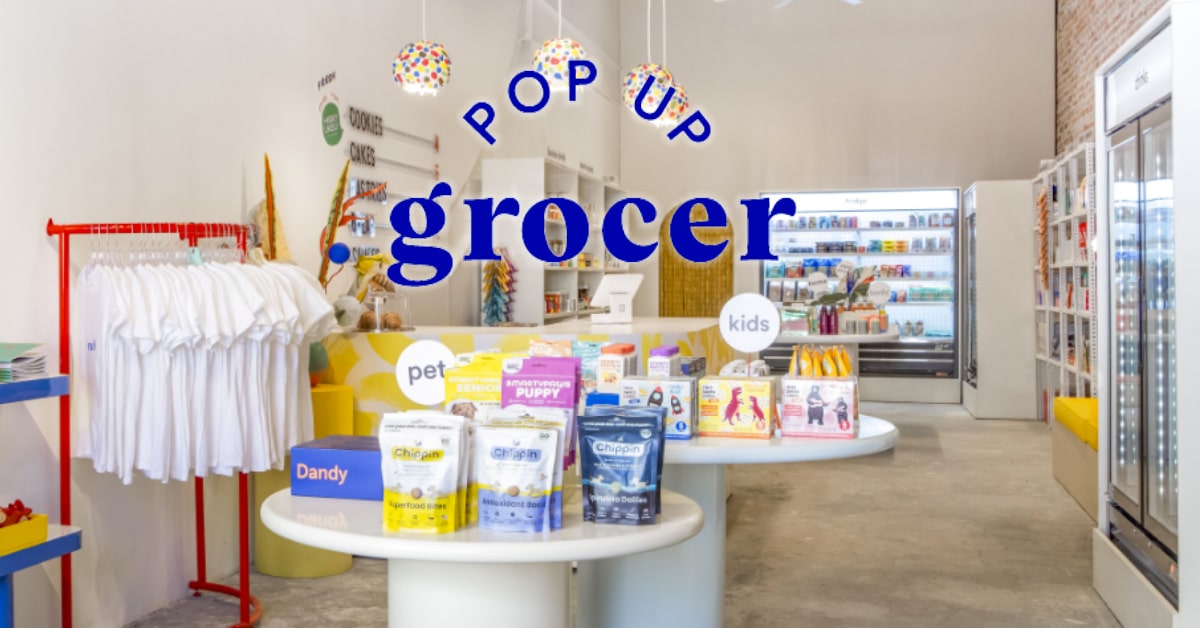 According to Emily Schildt, “We’re living in an age of too much stuff.”

With the goal of cutting through this clutter, Schildt, a CPG marketing consultant, founded Pop Up Grocer, a traveling food and beverage brand activation spotlighting a curated selection of emerging natural brands, offering them exposure to consumers, influencers and industry professionals in a candy-colored Instagram-friendly setting. After launching 10-day and month-long iterations in New York City last year, Pop Up Grocer moved west this month, opening a new month-long Los Angeles pop-up, with plans to expand to Austin, Texas in April.

Schildt conceived Pop Up Grocer as a way to ease the challenges emerging brands face in attracting both online and brick-and-mortar customers, where one SKU can get easily lost among a collection of many. Featuring over 150 food and beverage brands, such as low-sugar cereal brand Magic Spoon and prebiotic tonic maker Olipop, Pop Up Grocer functions less as a retail space (the average cart size is $15) and more as marketing tool, serving as a “platform for exposure and visibility,” said Schildt. Visitors are much more alert and engaged than they tend to be at typical retailers, she said, due to PUG’s bright, welcoming aesthetic and the urgency of its limited run. 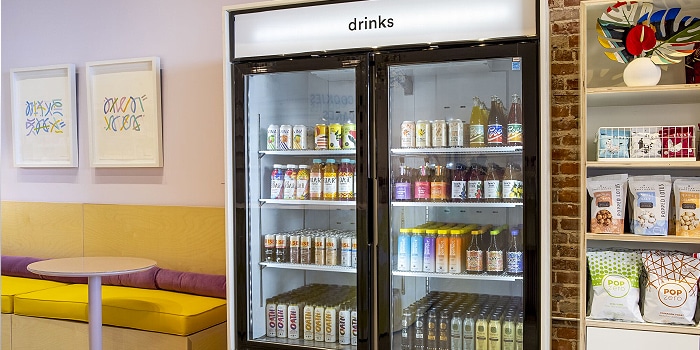 The focus of the pop-up is consumers, but Schildt said it has also attracted media and influencers along with food and beverage investors and retail buyers.

“We can serve as a much more manageable trade show for them,” she said. “Where these larger ones like Expo West are just so massive and really a lot for them to cull through, our selection is much narrower.”

By winnowing down this wide selection, Schildt said Pop Up Grocer serves as a “complement” to both e-commerce and brick-and mortar retail, creating an “intimate environment” that is less overwhelming for visitors. In contrast to retailers with a more “clinical” and “sterile” appearance, Pop Up Grocer’s design is “approachable and aspirational,” said Schildt, with a smiley face logo, couches to lounge on and whimsical category names like “breakfast-ish” and “bars + bits.” After hours events, which feature zero-proof cocktails from brands like CANN, Corsa and Proposition Cocktail Co., offer brands additional exposure.

These kinds of immersive in-store experiences are becoming increasingly essential tools for attracting consumers. Grocery e-commerce platforms like Hungryroot, Jet and Blue Apron and brands such as Recess, Dirty Lemon and KIND have all opened New York City pop-ups over the last few years. According to Salesforce’s 2019 Connected Shoppers Report, “consumers, especially Gen Zers, seek out stores that offer unique experiences — not just products and checkout lines.” Over half of Gen Z shoppers have attended a pop-up store, and 42% have participated in an experience-driven social event or demo inside a store, the report said.

Pop Up Grocer has three criteria for brand selection, Schildt explained. First, products must be “interesting” and “novel,” using ingredients in a new way. Second, they must meet a set of nutritional standards, being crafted with “intent” and “responsibility.” Finally, the products’ packaging must look good on the shelf. Schildt said she’s had to turn away several brands who have applied, most often because they don’t meet the packaging standards, which she said is important to consumers and for the store’s overall aesthetic.

Revenue is generated by a pay-to-play model, with participating brands being charged a “showcase fee.” Brands are allowed to set their own prices, usually choosing MSRP to “level expectations for local retailers,” though Schildt said they are encouraged to keep them low to “drive trial.” In-store, the shop provides a comprehensive “Shelf Talk” magazine with a guide breaking down the participating products and their ingredients. Schildt also has plans to launch an online store that will feature products from some of PUG’s participants even after the local pop-up shuts its doors. 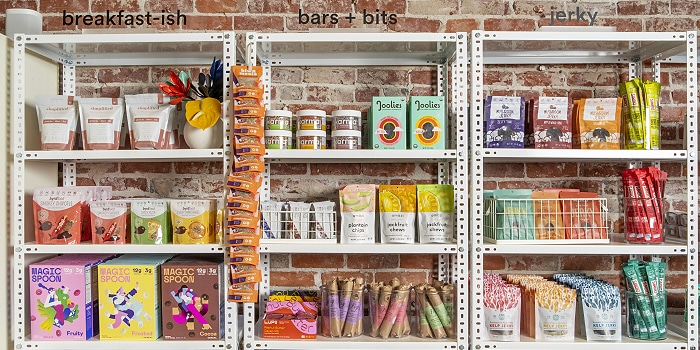 Pan’s Mushroom Jerky is among a group of brands that has participated in the pop-up through all three iterations. CEO Michael Pan said its New York location was valuable to the Washington-based brand as it sought to grow distribution there, helping him connect with angel investors, venture capitalists, buyers and influencers. The brand has also garnered media buzz from coverage highlighting Pan’s as a product for consumers to discover in the store. Pan said the brand will be joining the Austin pop-up as well.

“Pop Up Grocer is a moving train and I’m happy we decided to jump on board,” he said.

For California-based plant-based tonic brand Goldthread, another brand featured since Pop Up Grocer first location, the New York pop-up offered an opportunity to expand its reach to the opposite coast.

“It was a great way to expand our footprint and build brand awareness with a customer who’s interested in better for you alternatives and willing to invest in themselves,” said Goldthread marketing director Melissa Mathewson.

The bi-coastal reach of Pop Up Grocer was also a selling point for New York-based cold brew brand RISE Brewing Co. to join the Los Angeles location. The brand is currently in over 11,000 doors, including Walmart and Kroger, but just launched in Los Angeles last year and is “gaining great traction” in that market, said RISE’s COO Melissa Kalimov.

For kelp jerky brand AKUA, the New York City location was the first place its product line launched, appearing in the store window before it was even rolled out online. AKUA co-founder and CEO Courtney Boyd Meyers said it has helped the new brand “reach a highly targeted community of influential, early adopter shoppers.”

According to Melissa Gonzalez, CEO of The Lionesque Group, a firm of retail strategists and “pop-up architects,” PUG’s defined mission and clear aesthetic is essential for its success in gaining exposure for the brands on its shelves, especially as they seek to gain attention through social media.

“It creates organic, viral-like user generated content and when people see posts from their friends or others they follow it creates a stamp of approval for them,” she said. “The key is for all touchpoints to be consistent and authentic to the brand – it really has to further the brand’s mission, voice, be immersive and speak to the target audience.”

Looking ahead, Schildt said she wants to use this year as an “experiment” and as an opportunity to learn as the shop ventures to cities beyond New York and buzz around the pop-up drives new brands to her email inbox and LinkedIn comments.

“That’s the whole point of this — that it’s something worth talking about,” said Schildt.