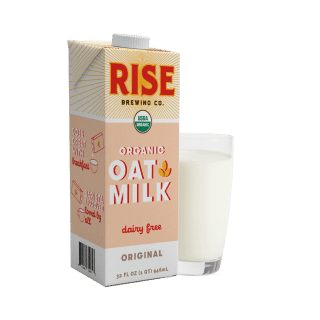 NEW YORK– RISE Brewing Co., the nitro cold brew coffee company, has announced the availability of their original organic oat milk. Now available for purchase on the RISE website and in Whole Foods stores in the Northeast region, the RISE Brewing Co. original oat milk tetra paks will retail for $3.99.

Unable to find a 100 percent organic oat milk on the market, RISE Brewing Co. originally formulated their own oat milk blend for the introduction of their oat milk lattes – the first organic ready-to-drink oat milk latte to hit the market. Delivering on their promise to never compromise on ingredients or taste, in true RISE fashion, they sourced the freshest organic ingredients they could find to create their first original oat milk, which will now be available to the public.

“Our organic oat milk latte line received such a tremendous response that many people were asking where they could purchase the oat milk separately,” said Grant Gyesky, CEO and Co-Founder of RISE Brewing Co.”Our organic oat milk not only tastes great but blends into coffee better than any non-dairy milk out there because of its ultra-creamy texture and natural sweetness.”

The new RISE Brewing Co. original oat milk is USDA Certified Organic, dairy-free, sustainable, vegan and shelf stable. Free of gums with only 4 ingredients – water, oats, sunflower oil and salt – the new product addition stays true to the brand’s unwavering commitment to use the best ingredients possible. Taking this tried and true organic oat milk formula, RISE plans to expand upon it with the addition of two more oat milk flavors – Chocolate and Vanilla – that will launch later in 2020.

The new RISE Brewing Co. original oat milk will retail for $3.99 and will be initially available on risebrewingco.com and in Whole Foods stores in the Northeast region before rolling out nationwide in stores later this year.