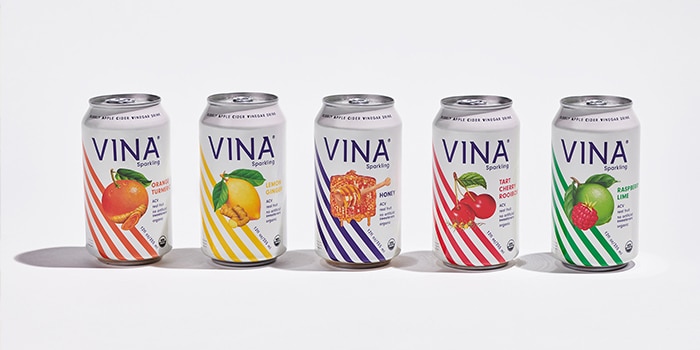 The line — available in Honey, Lemon Ginger, Orange Turmeric, Raspberry Lime and Tart Cherry Rooibos — is a blend of 1 oz. of organic apple cider vinegar, sparkling water and juice that contains less than 7 grams of sugar and 35 calories per 12 oz. can. Vina will launch at all 100 Whole Foods Market locations in the Southern California and Rocky Mountain regions, with single cans priced at $2.79 and 4-packs at $9.99. The brand has also partnered with Hi-Touch and LA Distributing for DSD service in Southern California.

This month’s Whole Foods launch does not mark Vina’s debut; the brand, created by Scot De Lorme in 2017, was previously marketed as a still tonic in 10 oz. glass bottles that was “very vinegar forward,” according to Matthews. However, after the brand faced early challenges, De Lorme held exploratory discussions with Matthews about joining the company; he eventually did in March 2018 as both an investor (via Here Studio, which owns 50% of the brand) and as a co-founder following the closure of Juice Served Here.

With De Lorme, a former VP of innovation at Monster Energy Corp., shifting his focus towards his work developing performance energy drink Adrenaline Shoc, Matthews set about restructuring Vina by “picking apart everything that’s happened before and putting it back together again.” This included bringing in private equity firm Karp Reilly, which holds a stake in Colorado-based kombucha maker Rowdy Mermaid, as well as other beverage brands. Terms of the investment were not disclosed.

VINA’s reemergence comes as apple cider vinegar beverages are pushing further into the market. Sparkling ACV drink brand Mother Beverage, a former New Beverage Showdown champion, was recently reintroduced as Poppi (also in a 12 oz can), while Bragg’s, the longtime wellness brand which helped popularize ACV as a dietary supplement, was acquired by private equity firm Swander Pace Capital last year. Yet Matthews noted that, in fact, the category has witnessed a false dawn previously.

“There was a moment about 3-4 years ago when drinking vinegars were in the market — Blueprint, Suja, KeVita and some other brands had them. And it didn’t really work, it didn’t really take off,” he said. “So why now? For me, the reason I think it’s relevant and it’s about to be a category as big as kombucha is because ACV as an ingredient is a commodity. There’s no mystery around it. It’s an ingredient that your parents know and trust, that has been used in kitchens around the world for centuries.”

In attempting to style apple cider vinegar for a new generation of health and wellness-minded beverage consumers, the revamped Vina roster has more balanced fruit and botanical flavors, along with redesigned branding, packaging, tagline and logo. The brand’s website also touts ACV’s purported health benefits, including anti-aging, digestion and detoxification.

Moreover, Matthews has built a specific identity for the product based around its pairing with food. Using taglines like “Friends With Food” and “Taste of the Med,” the brand is aiming to position itself as an elevated non-alcoholic complement to a Mediterranean diet (and lifestyle).

“If you look at [San] Pellegrino, their entire homepage is all about food. It’s not about water — it’s about food, it’s about chefs, restaurants, entrepreneurs within restaurants, culinary, young chefs, new talent in food,” said Matthews. “To me, that’s exciting, because it means they have positioned themselves with something that people do everyday. That’s our whole foundation as a company — we want to be friends with food. We want to align with chefs and restaurants and dining and cooking and that kind of stuff.”

That approach gives Vina a natural home in food service, an area with which Matthews is extensively familiar with from his time at Juice Served Here. The channel represents a “much more enticing opportunity” than conventional grocery, he said, and the brand has already secured several placements with gourmet outlets like Tartine Bakery, Eataly and Groundwork Coffee.

Vina’s website teases a look at forthcoming drink innovations, including a tonic (“a more potent version of the sparkling,” according to Matthews) and both a multi-serve and shot formats for raw ACV. Beyond beverages, Matthews envisions the brand as a broader platform for apple cider vinegar-based products, including gummies, chips and effervescent tablets for instant drinks.

“We definitely have styled it after those classic Italian sodas, but with the focus on ACV,” he said. “We are an apple cider vinegar brand — we aren’t a prebiotic (brand) or probiotic or fiber. It’s just the pure ingredient, because the pure ingredient stacks up.”