Milagro Tequila has a deep-rooted connection with art—from its founders’ original inspiration to the artistry of its liquid and its bottle design. The vision of Milagro started with founders, Daniel Schneeweiss and Moy Guindi, who embodied the creativity and self-expression of modern Mexico City, particularly its innovative architecture, art, music and design. The first step in bringing their dream to life was finding Pedro Juarez, the Master Distiller. Pedro’s vision started where the art of tequila begins – with the agave itself. He insisted on using only the remarkable Jalisco Highlands 100% estate-grown blue agave, which is sweet, fruity and aromatic, setting Milagro Tequila apart from other tequilas. The artistry came full circle with Milagro’s bottle design. The Select Barrel Reserve bottles are handmade, each crafted around a sculpture of the agave heart, and the brand’s logo, as featured on the brand’s Core line, was inspired by the organic forms of Mexico city street art. 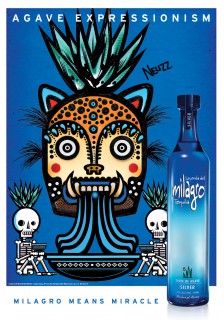 In 2015, Milagro Tequila continues to bring to life its inherent connection to art by commissioning some of Mexico City’s most admired street artists to harness the creative energy and modern vibe that is authentic to Mexico City and applying it to Milagro Tequila. In a decidedly selective process, Milagro discovered three unique Mexico City street artists—Beo Hake, Miguel Mejia (aka Neuzz) and Seher One—who have since created unique works of art, bringing to life the magical transformation of agave into an amazing liquid: Milagro Tequila. For Milagro, miracle in Spanish, the process and resulting artwork revolves around the notion that the process and resulting agave-forward liquid is truly a miracle.

Beo Hake, an illustrator and graffiti artist from Moterre, Nuevo Leon, Mexico, is inspired by his daily sensory experiences. The core of his style is an ethereal sense of daydreaming with recurring themes of animals and nature. Hake’s original artwork for Milagro was painted by hand, adding a sense of movement with his brushstrokes and texture with his choice of color.

Miguel “Neuzz” Mejia hails from Oaxaca de Juarez, Mexico, and is considered one of the most prominent contemporary artists throughout Mexico and Latin America. His style is heavily influenced by ancient Mexican indigenous art, which he laces throughout his graffiti murals and artwork. Mejis’ original creation for Milagro is a true reflection of modern Mexico and embodies the culture that Milagro represents. Eye-catching, colorful and graphic, he brings a unique and bold point of view to the brand world.

Seher One, born in Mexico City, is a graffiti artist and muralist. His work incorporates techniques from a variety of movements including surrealism, pop culture and graffiti. He is inspired by vibrant colors and natural chaos, which he brings into focus in an organized harmony and sensibility. Flowers and animals are constant throughout his work. For the Milagro creative, Seher depicted a serpent that is, in essence, the guardian of the precious blue agave. The droplets and liquid are representative of the transformation from agave to Milagro tequila.

Beginning on May 1, 2015, the three works of art will be displayed publicly via wallscapes and murals along the side of buildings and other areas in New York, Chicago, Los Angeles and San Francisco. Once discovered join the conversation using #AgaveExpressionism onFacebook, Instagram @milagrotequila and Twitter @milagrotequila.

Founded in 1997 by Mexico City natives Danny Schneeweiss and Moy Guindi, Milagro Tequila and has quickly escalated into one of the world’s leading tequila brands with one foot in tradition and the other in the future, combining the finest old-world techniques and traditions and applying modern technologies and processes to produce a superior product. This award-winning tequila brand from William Grant & Sons captures the spirit of modern day Mexico, from its entrepreneurial founders and artisanal bottles to the ingredients and distillation process.  The Milagro Tequila range consists of six expressions, with Silver, Reposado and Añejo expressions of its Core and Select Barrel Reserve ranges respectively. All Milagro expressions are distilled in both pot and column stills for the perfect balance of smoothness and agave flavor from 100% estate-grown blue agave.  Milagro Silver is crisp and clear, and is renowned for its smoothness, mixability and agave-forward taste, making it perfect in the signature Freshest Margarita, made with agave nectar and fresh lime juice.  All Milagro Tequilas have an ABV of 40% and retail between $24.99 to $43.99 for the core range and between $52.99 and $98.99 for the Select Barrel Reserve range.  For more information, visit www.milagrotequila.com.