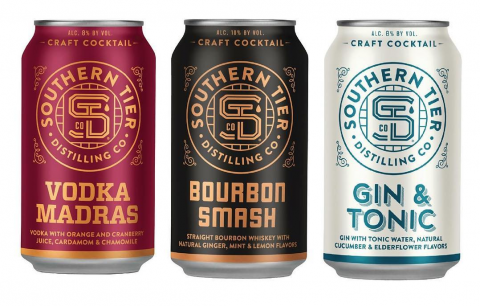 LAKEWOOD, N.Y. — Southern Tier Distilling Company announces the launch of three premium canned cocktails to add to its existing portfolio. Made from artisanal, all-natural ingredients and using STDC’s very own award-winning craft spirits, this will be the company’s first-ever ready to drink canned cocktail. The lineup includes: Bourbon Smash, Vodka Madras and Gin &Tonic. These classic cocktails with craft accents will launch in July 2018 in New York, New Jersey, Delaware and Ohio. Suggested retail price is $14.99 for a 12 oz. can 4-pack.

A citrusy 19th century cooler, cousin to the mint julep, this cocktail features a perfect balance of lemon, ginger and mint for a slightly carbonated, sweet and citrusy finish.

A sweet and delicious cocktail consisting of cranberry, orange, and lime. The addition of chamomile and cardamom gives this carbonated cocktail a crafty twist. It’s the perfect combination of juicy, sweet and savory.

A twist on a classic gin and tonic featuring hints of elderflower, cucumber and zest of lime creating a light, refreshing and carbonated cocktail.

After several years of professional brewery experience in Chicago, founders Phineas and Sara DeMink had a vision of bringing craft beers to a region rich in brewing heritage, but essentially devoid of production breweries. Southern Tier Brewing began in 2002 with second-hand equipment in the rural countryside near Lakewood, New York. By 2005 STBC covered the majority of state as well as Pennsylvania. Demand soon outgrew capacity, and in 2009 a new brewery was built on adjacent property. Several additions later, a new 110 barrel brewhouse was constructed in late winter of 2013 and by autumn a 45,000-sq-ft distribution center, and a water treatment facility were opened. Continuous investments in quality, team, tools, and technology have helped STBC grow into one of the top 25 brewers in the country.

Never one to slow down, Phin found the time to pursue a second passion: distilling. Using the original location of Southern Tier Brewing, in late 2015 Southern Tier Distillery was granted a New York State “Farm Distiller’s” license. STDC is committed to being a farm to glass distillery and prides itself in using 90% local ingredients. Why? Because it’s not just the time they put into the spirits that makes the products unique, it’s the grain, the passion and the thought as well. Much like the brewery, Southern Tier Distilling Company is a production facility grounded in handcrafted artisanal perfection. The distillery features a 5000 liter Kothe still with eight 5000 liter fermenters, over 600 barrels of rackhouse, bottling equipment, and tasting room. Significant synergies exist with the brewery due to co-location, including access to STBC’s 250 can/minute line, warehouse and logistics.