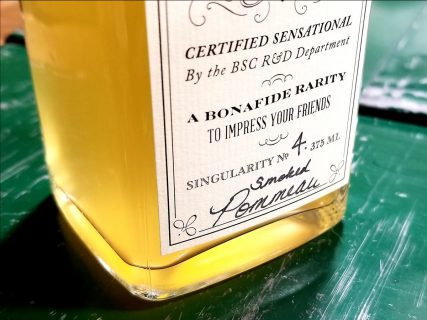 BALTIMORE— Baltimore Spirits Company (BSC) has announced the release of a new addition to their line of one-time-only E.B. Smith’s Singularities liquors. Titled simply Singularity #4, the new spirit is a smoked pommeau  – another first for the local craft distillery – and will be officially released November 9 during the All Things Apple Festival at Medfield’s Union Collective, which houses their production facility.

Pommeau, traditionally made by Calvados producers in the Normandy region of France, uses a similar distilling process to port or sherry, but instead of starting from grapes starts with partially fermented apple juice. To add a BSC signature flavor and style, the fermented juice comes from the smoked apple fermentations used in their Mescal-style Apple Brandy, Fumus Pumila, and is then mixed with their most recent run of Green is Gold Apple Brandy. The mixture is barrel-aged to create a unique expression unlike anything else currently on the market.

“This has been a hot topic around the distillery for weeks now. All of our employees are dying to get their hands on a bottle,” said Baltimore Spirits Company co-founder and CEO Max Lents. “This one is special. We expect people will be talking about the smoked pommeau for a long time.”

Singularity #4 is the newest in a steady stream of new and reimagined products released by Baltimore Spirits Company this year, including the Post Epoch runs of their award-winning Epoch Rye Whiskey, and their new Shot Tower Skeleton Spirit Gin, which was just released last weekend. E.B. Smith’s Singularity #4 clocks in at 42 proof and is available only at Baltimore Spirit Company’s distillery tasting room in the Union Collective for $39.99 starting November 9th at 12 PM. For more information, visit baltimorespiritsco.com.