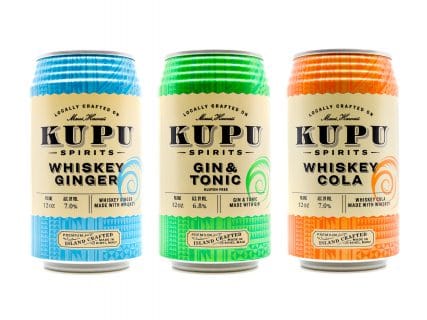 In the Hawaiian language, the word “kupu” means “to sprout” or “to grow.” “Kupu” is often represented by the new growth of an established fern where the shoot grows from the center of the trunk, its strength and protection derived from the original base.

“The name Kupu Spirits was chosen to symbolize the brand as part of the natural growth of Maui Brewing Company,” said Garrett Marrero, co-founder and CEO of Maui Brewing Company and Kupu Spirits. “The ready-to-enjoy cocktail category grew by over 40% in the last year, which showed us not only an opportunity, but a need to expand our craft in order to meet consumer demand for variety, flavor and convenience, starting in our home State.”

Kupu Spirits products are distilled and packaged at Maui Brewing Company’s “grid independent” facility, which is powered by a 1.2MW array of solar panels that cover the building’s roof, awning, and carports. Among its extensive industry-leading sustainability initiatives, the company was the first craft brewery in Hawaii to adopt and install a CO₂recovery system, which allows for reuse of CO₂ produced during the fermentation process to carbonate the company’s craft beverage products. Solar thermal systems reduce propane gas consumption by approximately 50% for water heating needs, while solar PV with Tesla battery well storage provides approximately 100% of power needs at the 85,000 square foot facility.

“As we charge toward our fifteenth year in business, we are so proud of our ongoing evolution, and look forward to applying the same tenacity, independent spirit, and commitment to sustainability and local production to support our first major brand expansion and entry into the craft spirits category,” added Marrero.

Kupu Spirits launches with initial availability throughout the Hawaiian Islands in single serve cans and four count packs. Key retail accounts include Whole Foods, Safeway, Foodland and Tamura’s, among others. Kupu Spirits products are available to retailers through the brand’s wholesale partner, Paradise Beverages, and can also be found at select restaurant, bar and resort partners, including Maui Brewing Company’s four restaurant locations throughout Maui and Oahu. While the initial focus will center upon meeting demand for RTD cocktails in the local Hawaii market, Kupu Spirits looks forward to expanding distribution to the mainland in the near future.

A brand extension of Hawaii’s largest independent craft brewery, Kupu Spirits debuts in Summer 2019 with the launch of a ready-to-drink craft canned cocktail collection including Whiskey Ginger, Whiskey Cola, and Gin & Tonic varieties. The craft cocktails blend Kupu Spirits Whiskey and Gin with Maui Brewing Company’s Island Sodas, which are created in-house using all natural ingredients like cane sugar, local island honey, and Hawaii-grown ginger. In the Hawaiian language, the word “kupu” means “to sprout” or “to grow.” The name Kupu Spirits was chosen to symbolize the brand as an offshoot of Maui Brewing Company, operating with a mission aligned to the same independent values, sustainability practices, and commitment to craft as its parent brand. For more information and to connect with the brand, visit KupuSpirits.com and follow Kupu Spirits on Instagram, Facebook, and Twitter.