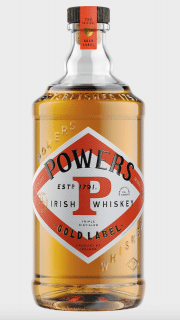 NEW YORK— Beginning 2020, Powers Gold Label Irish Whiskey – produced by Irish Distillers of Midleton Distillery – will unveil a bold new bottle in the U.S. The eye-catching design is set to attract a new generation of American drinkers who have an appetite to discover one of Ireland’s most loved whiskey brands.

The new bottle design that will lead Powers Irish Whiskey into the future was developed with its rich history in mind. Inspired by the vintage pot still silhouette, the shape subtly pays homage to Powers’ exceptional whiskey production, echoing the distillation method for which this historic Irish whiskey is renowned. The brand’s pioneering spirit is brought to life in the striking label design, including the iconic red Powers diamond “P” – one of the first ever trademarks registered in Ireland and a link to the historic legacy of Powers and Irish whiskey.

Carol Quinn, Archivist at Irish Distillers explains, “Powers’ sense of identity has always been rooted in the diamond P, aa sentiment that became very clear to me as I worked my way through the historical archive. The diamond P was everywhere: on the casks, stationary, on bills and receipts, emblazoned on everything that left the distillery, and notably on the wonderful Powers mirrors that still hang in Ireland’s pubs today. Workers at the old John’s Lane distillery even took to wearing a diamond P pin on their lapel, such was their pride to be part of the Powers family.  It’s wonderful to see the diamond P front and centre on this new label, symbolizing all the history of this great whiskey since 1791.”

Fiona Canning, Brand Leader for Powers in the U.S. comments, “This innovative bottle design for Powers Gold Label marks a dynamic new chapter for our brand.  Since the family distillery was established in the late 18th century, Powers has been woven into the fabric of Ireland, thanks to its bold taste profile and character. Now, during a time when Irish whiskey is experiencing a renaissance in the U.S., we’re taking a bold approach to inspire a new generation of American drinkers to discover the unique history and personality of Powers.”

Powers Gold Label Irish Whiskey in its new packaging will be available just in time for St. Patrick’s Day 2020 at wine and spirits retailers (SRP: $31.99 / 750mL) and restaurants and bars across the U.S. For more information, follow us on Instagram at @PowersWhiskeyUS.

Irish Distillers is Ireland’s leading supplier of spirits and wines, and producer of some of the world’s most well-known and successful Irish whiskeys. Led by Jameson, our brands are driving the global renaissance of Irish whiskey. Jameson is the world’s fastest-growing Irish whiskey, experiencing 30 years of consecutive growth and hitting sales of 7.7m cases in 2018/19. Our brands are exported to 130+ markets, with over 70 of those experiencing double or triple-digit growth.

Irish Distillers was formed in 1966, when a merger took place between John Power & Son, John Jameson & Son and Cork Distilleries Company. In 1988 Irish Distillers joined Pernod Ricard, gaining access to unprecedented levels of investment and an extensive global distribution network. Since 2012, we have invested over €400 million to double our production and bottling capacity to meet global demand for our products.

We employ over 600 people across our operations in Cork and Dublin.

Pernod Ricard is the world’s n°2 in wines and spirits with consolidated Sales of €8,987 million in FY18. Created in 1975 by the merger of Ricard and Pernod, the Group has undergone sustained development, based on both organic growth and acquisitions: Seagram (2001), Allied Domecq (2005) and Vin&Sprit (2008). Pernod Ricard holds one of the most prestigious brand portfolios in the sector: Absolut Vodka, Ricard pastis, Ballantine’s, Chivas Regal, Royal Salute and The Glenlivet Scotch whiskies, Jameson Irish whiskey, Martell cognac, Havana Club rum, Beefeater gin, Malibu liqueur, Mumm and Perrier-Jouët champagnes, as well Jacob’s Creek, Brancott Estate, Campo Viejo and Kenwood wines. Pernod Ricard employs a workforce of approximately 18,900 people and operates through a decentralised organisation, with 6 “Brand Companies” and 86 “Market Companies” established in each key market. Pernod Ricard is strongly committed to a sustainable development policy and encourages responsible consumption. Pernod Ricard’s strategy and ambition are based on 3 key values that guide its expansion: entrepreneurial spirit, mutual trust and a strong sense of ethics.