This brand is no longer available

Since we first took a look at B’More Organic back in 2011, the brand, as well as the drinkable yogurt category it lives in, have evolved quite a bit. 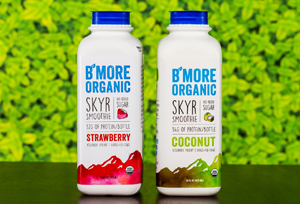 On the former, the most noticeable change for B’More is the product’s branding. It has a much more vibrant and clean look, starting with the block font used for the logo. From there, they’ve arranged the key attributes into different panels and this helps with the readability of the product. However, one thing that we think they could evolve is the messaging, which doesn’t include “drinkable yogurt.” We’d argue that this would catch a whole lot more eyeballs than skyr, which, despite growing awareness, is still not something that we’d call mainstream. Furthermore, calling out the probiotic content certainly wouldn’t hurt either.

As for the flavors, we sampled two varieties for this review: Coconut and Strawberry. Strawberry is much more of a “staple” flavor as far as yogurt is concerned. Using stevia and the sugars from the added fruit as the sweeteners, the product has a mild, “tad sweet” flavor profile. As we mentioned back in 2011, there’s a bitter flavor to the product, which will definitely take some getting used to. Still, it’s not a bad tradeoff when you consider that the product has 100 calories, 16g of protein, and only 7g of sugar per 8oz serving. And we really think they nailed the viscosity on this one -- it’s thick but not too thick. The Coconut variety, on the other hand, is very viscous to the point where you’ll really have to coax it out of the bottle. Coconut cream, which is the source of the coconut flavor, is the likely culprit, but it does impart a nice coconut note to the product’s body. However, thinning it out would certainly be helpful.

In the end, we think B’More has a lot of potential and, with this latest effort, is continuing to inch closer towards it. The concept of a low sugar high protein drinkable yogurt is very much on trend and they’ve made the product look a lot more modern and visually appealing. Now, there’s just some refinement that’s needed, both in the formulation and how they communicate their value proposition.