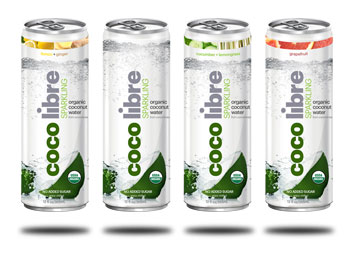 Coco Libre’s Sparkling Organic Coconut Water is an effort to innovate in what has otherwise been a somewhat stagnant coconut water category. In essence, the category got to a point where every flavor, packaging, and functional format had been tried, but the core unflavored and unsweetened variety was really what was towing the line (take note cold-brew coffee category…). So, now that things have essentially cooled off and there isn’t a new coconut water coming to market every week, perhaps things will be different?

For Coco Libre, whose line includes still coconut water as well as coconut protein smoothies, going into a carbonated and can-based product makes their lineup seem somewhat unique compared with what other brands are doing. And in theory, this takes coconut water into a new area of the store and might be able to grab a piece of the rapidly growing sparkling category.

As for the product line, it currently comes in four varieties according to their web site. We took a look at each one:

The packaging is in line with their other efforts, which feature a white backdrop, a coconut image, and the words “coco libre” across the front in lower case. It’s admittedly not the flashiest product in the cooler -- and we’re frankly not sure why they changed from their more brightly colored labeling that they had previously adopted with their protein line. While the current look is effective at communicating that the product is coconut-based, the lack of visual pop combined with a rather small callout for the flavor name leaves us wanting more. Establishing a stronger brand and making it easier to tell the difference between the flavors would undoubtedly help. And calling attention the product’s low level of calories (20 per can), might be something that also helps.

Finally, there’s the question of whether or not sparkling makes sense for coconut water. This isn’t the first brand to go down this path (Jax Coco was, as far as we know) and it’s certainly not something that has been an immediate success. From our vantage point, we still question whether or not coconut water is viable as an ingredient rather than the only ingredient (as it is in unflavored natural coconut water). But regardless, Coco Libre has done a nice job with this product and what they've created feels quite timely.