Uncommon Coffee Roasters, which is a Saugatuck, Mich.-based coffee roaster and cafe operator, has launched this line of dairy style cold-brew coffees that are offered in three flavors: Straight, Cold-Brew Coffee with Chocolate Milk, and Cold Brew Coffee with Half & Half. 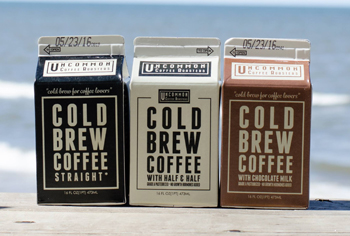 Packed by Guernsey Farms Dairy, the products are packaged in a 16 oz. milk carton. It’s one of only a handful of cold-brew coffee products that are offered this way (Blue Bottle and Stumptown are also notable offerings). For the two flavors with milk, this is a somewhat logical approach as it produces a higher quality milk flavor than more harshly pasteurized shelf stable offerings. However, for the Straight variety, which is cold-brew coffee without anything else added, it was somewhat awkward drinking coffee from a milk carton. But the design of all three flavors is straightforward and easy to understand.

However, if there’s any criticism of the packaging, it would have to be with how they’ve incorporated the Uncommon brand. Specifically, it’s easy to miss and not overly memorable looking. That’s something that they might want to consider, especially with the sheer number of cold-brew coffee brands that they’ll compete with.

As for the taste of the three products, here’s a rundown:

All in all, the flavors are good, but have room for improvement, most notably with the lack of coffee flavor in the two dairy-based varieties.

This leads us to our final conclusion about this brand, which is that they’ve leaned too far towards the dairy case, both in packaging and formulation. Reconsidering this approach, either through this line or a line extension, should add some more muscle to the product. Until then, we feel as though the niche that they are serving is a bit too narrow.