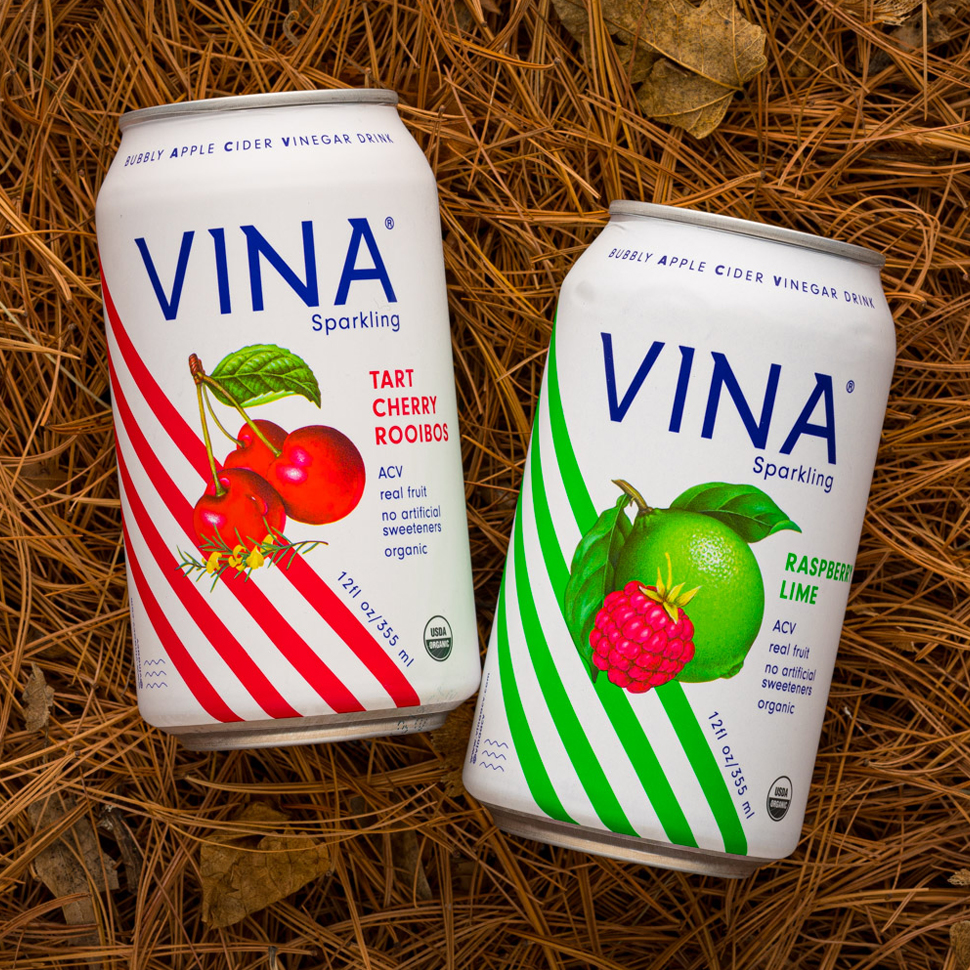 Announced in February, Vina is a USDA certified organic line of sparkling apple cider vinegar (ACV) beverages. The products, which were originally launched in 2017 in a different format, have been rebranded and repackaged in 12 oz. cans.

At launch, the line has five flavors: Orange Turmeric, Lemon Ginger, Raspberry Lime, Tart Cherry Rooibos and Honey. Each has between 35 and 45 calories and 7-8 grams of sugar per can, depending on the SKU, putting it on the lower end of the spectrum for sparkling beverages that aren’t using a zero calorie sweetener.

All of the flavors start out the same way with a pretty bold note of apple cider vinegar, along with a touch of apple juice. The added carbonation works nicely and the brand has done a nice job of crafting the different flavors, which each use between 4% and 22% juice alongside natural flavors to round things out. For a sweetener, some of the SKUs use honey or maple syrup and others have zero added sugar and rely solely on the juice.

Of the initial five flavors, the standouts for us are Honey, Lemon Ginger. and Orange Turmeric.

Honey could probably work as a flagship SKU if the line were to have one, as it provides the purest ACV flavor. Lemon and Ginger and Orange and Turmeric both follow the same approach of pairing citrus with spice and both work quite well, while the classic summertime pairing of Raspberry Lime also is a strong match with the ACV.

These four flavors definitely have some solid potential. However, we wish that some of them had a bit more punch to help counterbalance the ACV and create some more differentiation between the flavors.

Lastly, there’s Tart Cherry Rooibos, which is the most complex of the bunch. Blending rooibos tea with cherry, strawberry, raspberry, cranberry, apple, and pear juices and the resulting flavor just isn’t as clean as the others.

On the outside, Vina uses a white shrink sleeve label and sports a modern design. The Vina logo and a fruit graphic are fruit and center while colored lines, with a different color for each flavor, run on a 45 degree angle on the bottom left. “Bubbly apple cider vinegar drink” is written across the top of the can, so it’s pretty easy to quickly figure out what this drink is all about.

If there’s anything about the design that we’d change, it would be the list of elements sitting beneath the flavor name. While we can understand why they made that choice,it clutters the design and is, like saying “organic” in some cases, redundant. Our only other constructive feedback is that the image used for the Honey SKU (a honeycomb dripping with honey and a honey dipper) requires you to look closely to figure out what it is.

Overall, this is a really nice update for Vina that makes it one of the better executed ACV drinks out there today. This line feels like something that will fit quite nicely into the better-for-you sparkling set.