“Whiskey is distilled beer,” said owner/distiller Darek Bell, “and is made or broken as much in the mash tun as the still. Karen’s love of her craft makes her the perfect fit for Corsair.”

Bell first met Lassiter at a brewing competition when he as a homebrewer, years before Corsair, and was impressed with an ancient Egyptian beer she had made. Lassiter’s suds have won over 26 medals at brewing competitions including a Gold Medal at the “Great American Beer Festival” for a hefeweizen. She was an avid homebrewer for 11 years before joining Boscos where she has worked for 6 years, 5 as Head Brewer. Lassiter was trained at the Siebel Brewing Institute. 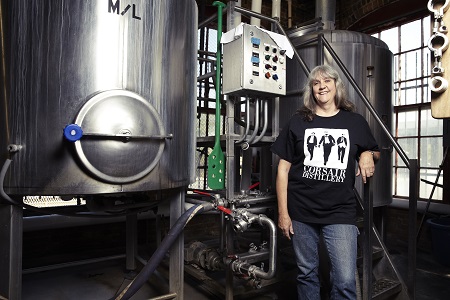 Corsair Distillery has had a breakthrough year, winning two “Distillery of the Year” awards, one for the American Distilling Institute’s “Bubble Cap” award in Seattle, WA and one for the Wizards of Whisky awards in the U.K. Corsair was named a “breakout brand” by Beverage World Magazine. Another important accolade was that cofounder Darek Bell was named one of the 10 most pioneering distillers by The Spirits Business Magazine. Adding Lassiter will be a boon for Corsair’s aggressive growth plans, as they are building two new distilleries in the Wedgewood Houston area of Nashville on top of the original distillery in Bowling Green, KY and distillery in the Marathon Village area of Nashville. Corsair has also built a craft maltery facility in Bell’s Bend.

Women key to Corsair’s success
Despite the masculine look of their products, the women behind the scenes have been crucial to Corsair’s success. Corsair not only has a female head distiller in Andrea Clodfelter, but even rarer, a female owner: Amy Lee Bell. Another key for Corsair’s charm on the hospitality side is Bar Manager Emily Kendall. Karen Lassiter will be another great asset to the Corsair culture.

Corsair has won three “Craft Distillery of the Year awards” for the American Distilling Institute, Whisky Magazine, and the Wizards of Whisky competition.The distillery has won a number of other notable awards, including two “Innovator of the Year” awards from Whisky Magazine’s Icons of Whisky awards.Corsair’s triple smoke whiskey won “Artisan Whiskey of the Year” for Whisky Advocate Magazine.