With new American-made copper stills, a veteran distiller and a handcrafted ethos, Dogfish Head Distilling Co. is expanding its distilling program this November with the launch of its 100% scratch-made spirits line. 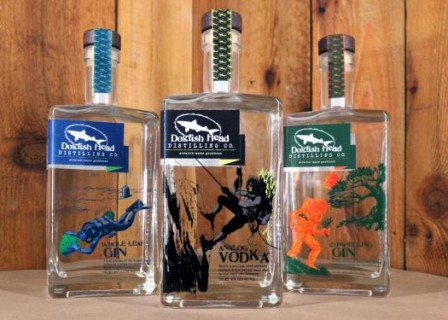 “We’ve been distilling off-centered spirits on a very small scale out of our Rehoboth brewpub since 2002,” says Dogfish Head Founder and President Sam Calagione. “As I travel, one request I hear over and over from our passionate beer consumers is, ‘When are you going to step up the spirits program and take Dogfish Head’s off-centered approach to a wider audience?’ Well, over the last year we’ve made the right investments, and the answer is now.”

“You can make spirits from almost any type of raw material, we have chosen to start with the same ingredients that go into our beer,” says Hamblett, a horticulturalist with nearly two decades of experience running an artisanal winery and distillery. “In our process, everything starts in its rawest form, from scratch, and we will use the best ingredients available. We use a batch distillation approach through each stage. It’s a bit more work than other approaches, but it allows me to closely monitor and control each step of the distillation process.”

Other spirits, including rum and whiskey, are on the horizon. “With access to Dogfish Head’s brewing equipment and ingredient resources, and our long history of bending stylistic guidelines using different grains and wood-aging techniques, we plan on distilling and aging all sorts of delicious spirits in the near and long term,” says Calagione.

“What we’re seeing is that consumers are looking for the same ‘goodness’ out of their craft spirits that have led them to explore craft beer,” says Distillery Manager James Montero. “They want a high-quality distilled spirit and an honest and authentic approach wrapped in an interesting story.”

“Many distillers,” Montero continues, “are buying bulk spirits from large distilleries and rebranding them, but our spirits are 100% scratch-made. We start with the best ingredients possible, brew them using the best equipment and processes, then distill them in a manner that allows them – even our vodka – to maintain the ‘goodness’ of all those delicious ingredients. Having this type of ownership and expertise over the full process is becoming increasingly rare in the spirits world.”

Calagione agrees. “The goodness that our fans have come to expect in their beer glass will now be available in their rocks glass.”

Dogfish Head has been making small-batch spirits since 2002 at its Rehoboth Beach brewpub. In 2015, Dogfish Head Distilling Co. is expanding its line of 100% scratch-made spirits, produced out of its new distillery at the center of Dogfish Head’s Milton campus.