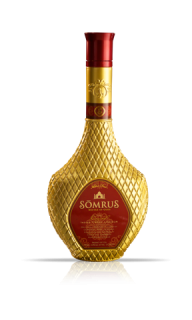 CHICAGO, IL – APRIL 2015 – Chicago-based SomPriya Fine Spirits is proud to announce its premiere product SomruS, The Original Indian Cream Liqueur (www.somrus.com), is now available in Connecticut, distributed exclusively through Connecticut Distributors Inc. (CDI). Since its launch less than a year ago, Connecticut marks the fifth state to carry the award winning, first of its kind Cream Liqueur joining NY, NJ, IL and MA where it has already seen significant success via retailers such as Whole Foods, Sam’s Club, Binny’s and Liquor Barn.

The industry and critics have been quite supportive of the brand evidenced by SomruS not only being awarded a prestigious score of 94 Points by Wine Enthusiast but has been designated one of theTop 50 Spirits of 2014 by the magazine. The magazine describes it as “creamy but light and…a palate-cleansing way to end a richly spiced meal.” They continued by saying, “The ornate gold and red bottle is an eye-catcher, too.” This rating puts the product in the ‘Top Shelf or Outstanding’ category of spirits. Others agree as noted by the New York Spirits International Competition who gave SomruS the title of “Cream Liqueur of the Year” for 2014, and the China Wine & Spirits Awards (CWSA) 2015, the biggest and most prestigious award competition in Hong Kong & China, who awarded the brand a Gold Medal.

SomruS is an intricate blend of pure dairy cream and hand-crafted rum with the distinctive eastern spices and flavors of cardamom, saffron, almonds, pistachios and rose. The result is an all-natural, gluten-free and Kosher liqueur never before seen or tasted. All indelibly etched on the palates of those who enjoy Indian cuisine or the exotic culture of the Eastern Hemisphere; one can be savored on its own, can lend its intriguing taste and texture to a cocktail or even be incorporated into a dessert.

The exotic gold-coated bottle matches the magic of what it contains. The UV protected, custom-made glass bottle draws inspiration from an ancient Indian decanter, instantly setting it apart from anything else on the shelf. SomruS is being distributed by prominent distributors in Illinois, New Jersey, New York, Massachusetts and now Connecticut with plans to go nationwide and abroad in coming months.  It is also available online at www.SomruS.com. SomruS is available in a six-pack case with a retail price per 750ml bottle of $27.99 – $29.99.