LOUISVILLE, Ky.–(BUSINESS WIRE) — Angel’s Envy™, the super-premium Kentucky Straight bourbon whiskey of uncompromising character and quality, will officially open its new distillery and visitor center to the public for guided tours beginning Saturday, November 19. Online reservations, which are required, are now being accepted at www.angelsenvy.com. Admission is $15 per person and includes a tasting.

Located at 500 E. Main Street at Jackson, (the former Vermont American and Baer Fabrics Warehouse), the new state-of-the-art facility is the first full-production whiskey distillery in downtown Louisville. Having completed a $27 million renovation since breaking ground in 2013, the brand home center houses the Angel’s Envy distillery operations (including everything from milling of grains to blending and bottling on site), as well as a visitor center and gift shop. From the exterior walls to the vaulted ceilings and arched windows, their architects worked diligently to preserve every possible feature of the original building. Their breathtaking, one-of-a-kind 35-foot-tall column still, pot still and doubler were sourced locally from Vendome Copper & Brass Works—just four blocks away. 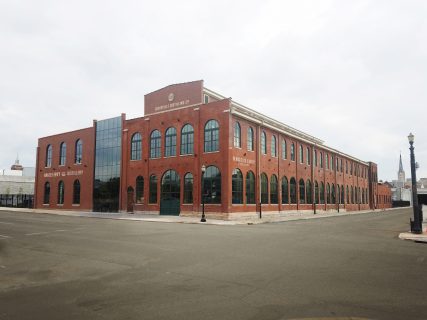 “Opening the Angel’s Envy distillery and visitor’s center in downtown Louisville was a dream Dad (Lincoln Henderson) and I had,” said Wes Henderson, Co-founder/Chief Innovation Officer, Louisville Distilling Company. “He would be so proud of what we’ve accomplished in such a short amount of time. My sons and I proudly carry on his legacy. The distillery is a must-see experience.”

The Angel’s Envy distillery and visitor center will be open for tours every Monday and Wednesday through Saturday from 10:00am – 5:00pm, and every Sunday, from 1:00 – 5:00pm. Tours will not be available on Tuesdays.

The ANGEL’S ENVY™ brand is part of the portfolio of Bacardi Limited, headquartered in Hamilton, Bermuda. Bacardi Limited refers to the Bacardi group of companies, including Bacardi International Limited.