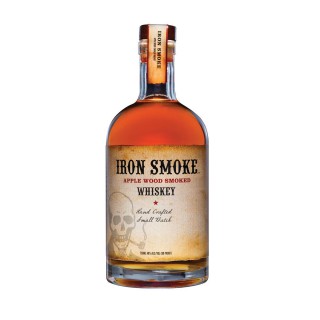 FAIRPORT, N.Y., Aug. 1, 2016 /PRNewswire/ –– In a new partnership as agreeable as two fingers of fine whiskey over ice, LiDestri Food and Drink and Iron Smoke Whiskey are joining forces to take on the craft whiskey renaissance.

LiDestri, which has a comprehensive spirits portfolio, had been looking for a reliable supply of high-quality, small-batch whiskey to help it meet white-hot consumer demand for craft brown spirits, which is currently growing at 30 percent per year according to the American Distilling Institute (ADI).

“We’re one of the largest craft farm distilleries in the Northeast and take great pride in using all locally sourced ingredients from family owned farms in the New York State Finger Lakes region,” Iron Smoke founder Tommy Brunett said. “Now LiDestri is lending muscle to our national footprint and putting a lot of resources into helping us expand.”

In return, LiDestri will be able to offer its retail customers something that has become increasingly difficult to source: hand-crafted, highest-quality whiskies, including Rattlesnake Rosie’s Apple Pie Whiskey and the Fairport, N.Y., distillery’s namesake, Iron Smoke, an applewood-smoked, bourbon whiskey is aged 18 to 20 months in virgin American oak barrels.

“We are incredibly excited to be teaming up with Iron Smoke,” LiDestri Co-President Stefani LiDestri said. “Our company has always been focused on authenticity in everything we do and everything we produce, and Tommy and his brand are a living, breathing example of that 100 percent.”

Authenticity in craft bourbons requires aging, which is one reason demand for the good stuff is now outstripping supply. Consequently, empowered by its new partnership with LiDestri, Iron Smoke has plans to rapidly ramp up production from the current 1,000 cases per month to 2,000 per month by the end of the year and up to 4,000 cases per month in 2017. At that point, the distillery will be just below the threshold of what it means to be craft: 52,000 cases or fewer per year, according to ADI.

An increasingly glitzy awards wall at Iron Smoke creates confidence for both companies that shoppers will buy as much as the companies can create.

“The awards and accolades certainly help; we get requests for our whiskeys and branded merchandise from all over the world,” Brunett said. “One cool hunter blog out of London wrote that Iron Smoke is one of the best whiskies—if you can find it.”

Stefani LiDestri said another thing that attracted her spirits team to the partnership is Iron Smoke’s dedication to buying all its grain from NYS farmers, many of whom recycle the spent mash into animal feed. On a personal note, she said she and fellowRochester native Brunett have been acquainted 20 years, going back to when they frequented the same live music venue, the Bug Jar, which coincidentally was owned at the time by Brunett’s partner in Iron Smoke, Steve Brown.

“The opportunity to partner with another homegrown company was just too good to pass up,” LiDestri said.