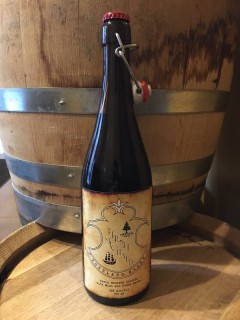 PORTLAND, MAINE (January 27, 2016) – Liquid Riot Bottling Company officially announced today the addition of Fernet Michaud® to its lineup, strengthening the brand’s position as the most diverse brewing and distilling portfolio of Northern New England. Fernet Michaud is a 82 proof (41% abv) amaro (Italian for “bitter”) and is available in 750ml bottles. Priced at $34.99, Fernet Michaud is available for purchase at Liquid Riot and through Maine’s Agency Liquor stores. Liquid Riot is located at 250 Commercial St., in Portland, Maine.

“Amaro is something I have dreamed of distilling since my wife and I journeyed across Europe together, before we had kids,” said Eric Michaud, Liquid Riot’s founder and owner. “Watching an older couple drink amaro after dinner in Bamberg, Germany, and seeing folks sitting at outside cafes in the narrow alleys of Venice sipping amaros, really struck a chord for me. The culture and the history behind it, the fact that this type of spirit has been produced for so long, has made its way around the globe, and is consumed by people of all ages, made me want to make something like that here in Portland.”

Fernet Michaud is infused with 22 herbs and botanicals over the course of 6 days and is then aged 3 months in Maine blueberry wine barrels. With earthy notes of bitter aloe, rhubarb and fennel, and a smooth palate and pleasant minty finish, Fernet Michaud is a true drinking bitter. Fernet Michaud is great as a digestive after a nice meal, sipped neat or on the rocks, or mixed in a craft-cocktail at home or at the bar.

Liquid Riot’s roots date back to 2001 when Eric Michaud’s home-brewing filled his parents’ basement in Yarmouth, Maine, with batch after batch of newly created beers. Today his passion for brewing authentic beers and distilling unique spirits pairs perfectly with the great food served at Liquid Riot Bottling Company, opened in 2013. Liquid Riot’s mission is to share the passion for brewing and distilling and to educate curious customers about the art of transforming ingredients into exceptional beers and spirits. Liquid Riot is named for the Portland Rum Riot and Chicago Beer Riot, both in 1855. Other Liquid Riot spirit brands include the “Old Port” line-up of Rye, Single Malt, Bourbon, and Oat whiskies, as well as Old Port White Oat Whiskey, Well… Vodka, Rhum Blanc, and Dow’s Demise Aged Rum, available at select bars and restaurants in Maine and at Liquid Riot’s resto-bar.

Liquid Riot’s Old Port Rye earned a silver medal at the 2016 Great American Spirits Festival. The brand earned the coveted 2016 Great Lost Bear “Brewpub Cup” and the 2015 Phoenix Best-Of Award, for Best Brewpub in Portland, Maine. Ratebeer.com has named Liquid Riot the Best Brewpub in Maine the past two years. Liquid Riot maintains 16 of its own beers on tap at its 250 Commercial St. resto-bar. Liquid Riot currently cans five varieties of its beers with limited availability and periodically releases barrel-aged and specialty beers in bottles, which are available at Liquid Riot, 250 Commercial St., in Portland, Maine. liquidriot.com.