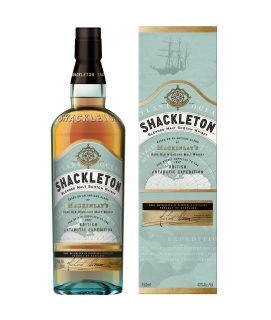 Sir Ernest Shackleton commissioned 25 cases of Mackinlay’s Rare Old Highland Malt Whisky for his record-breaking Antarctic expedition of 1907. Aboard the ship, “Nimrod”, Shackleton led his second attempt to go where no one had before – The South Pole. Shackleton and his men reached 88 degrees south, further than his previous attempt, but still 97 miles short of the pole. Faced with disaster, Shackleton turned back, leading everyone in his crew home to safety even after their ship was lost to the ice. In the race for survival, supplies were left behind, including three cases of Mackinlay’s Rare Old Highland Malt.

Shackleton is a blend of Highland Single Malts for a richer and more flavorful profile than traditional blended scotch whiskies. The malts are uniquely married for an extended period of time in a combination of ex-bourbon American white oak barrels and Spanish Sherry butts to harmonize flavors. The result is a rich and robust whisky, which offers notes of vanilla, honey, ginger and liquorice, with a whisper of bonfire smoke.

Shackleton is the first blended malt brand to join Whyte & Mackay’s portfolio as a permanent offering.

“This launch represents an exciting, emerging direction for Scotch whisky,” said Stuart Bertram, Head of Whisky Development Brands at Whyte & Mackay. “With the accessibility of a blend and the craft credentials of a malt, this unique, storied brand is set to bring a new group of whisky drinkers into scotch.”

Shackleton will be available in the US beginning November 2017 with a recommended retail price of $35 per 750ml bottle. To learn more, please visit www.theshackletonwhisky.com and follow @theshackletonwhisky on Instagram and Facebook.

For further information, or to arrange a tasting, please contact kahlil@the5thcolumnpr.com.

Sir Ernest Shackleton (1874-1922), British Explorer, Leader, Legend. The man who led the very first expedition to set foot on the South Polar Plateau; the man whose team conquered the Antarctic’s most active volcano Mount Erebus; the man who broke records, reaching the furthest south of any expedition before famously turning back, when just 97 miles from the South Pole in order to save the lives of his men. A charismatic leader who set his own course.

Recreating the style once commissioned by Sir Ernest Shackleton for his legendary 1907 Antarctic expedition, Shackleton Blended Malt is handcrafted from the finest Highland Single Malts expertly married in a combination of American oak ex-bourbon and Spanish sherry casks. Big, bold, with a whisper of smoke, Shackleton is the perfect craft malt for the modern explorer. Shackleton Blended Malt was awarded a Gold Medal by The Spirits Business in their 2017 Scotch Whisky Masters. For more information, visit www.theshackletonwhisky.com.