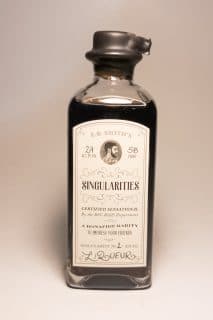 Made in a style similar to fortified wine, Singularity #1 was distilled from the fermented wort — the liquid extracted during the mashing process when brewing beer or whiskey — of Union Craft Brewing’s seasonal Snow Pants Stout. Baltimore Spirits Company then added their own unfermented Snow Pants Stout wort back to the distillate and left the spirit to age in their signature oak barrels for over two years.

The final product is an unprecedented and unclassified liqueur that is described as similar to sweet vermouth, but malty and chocolatey like stout beer with a higher proof. The bottle’s label, which will be used for all of the Singularity releases, features the profile of Baltimore Spirits Company’s co-founder and head distiller, Eli Breitburg-Smith.

“One of the things that attracted us to distilling was the potential for creativity and new expression,” said Baltimore Spirits Company co-founder and CEO Max Lents. “I think we’ve accomplished something special with this project, which really is one of a kind and the quintessential product to launch our Singularities project.”

Baltimore Spirits Company has plans to release three more Singularity products in the coming months, including a pear brandy due in February, and two other yet unnamed. E.B. Smith’s Singularity #1 is available only at Baltimore Spirit Company’s distillery tasting room in the Union Collective for $39.99. For more information, visit baltimorespiritsco.com.

Founded in 2011, Union Craft Brewing Company is situated along the Baltimore’s Jones Falls river and was the first production brewery to open in Baltimore City in 30 years. Union’s beers are now distributed throughout Maryland, Washington D.C. and Northern Virginia. The brewery’s onsite tasting room is open Thursday-Friday 5-8 p.m. and Saturday from 1-5 p.m. for tours and tastings. For additional information, visit us at unioncraftbrewing.com, facebook.com/unioncraftbrewing or follow us on Twitter at @UnionBrewing.