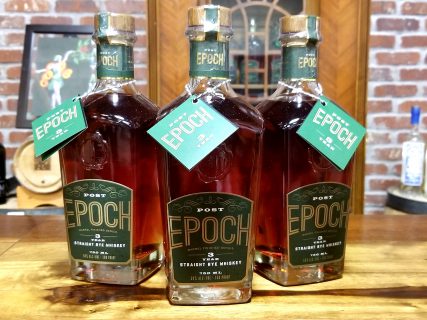 BALTIMORE, MD – Baltimore Spirits Company (BSC) has announced the release of another new addition to their Post Epoch line of award-winning whiskeys. Available for pre-order now and to be officially released this Saturday, Toasted Barrel Finish Post Epoch Rye Whiskey is the first spirit produced by the distillery to use a toasted barrel method, their ninth special product released this year, and the final launch for 2020.

While whiskey is typically aged in barrels that have a charred interior, the new 100 proof Post Epoch spent the last year of its three year aging process in an American oak barrel with an interior exposed to lower and more gradual heat creating a toasted layer; a technique usually used for wine. Unlike previous Post-Epoch releases where the type of barrel was intended to add flavor, the toasted finish barrel causes the whiskey to mature differently by allowing it to more deeply penetrate the wood cask, which amplifies the sweet, caramel flavor and leaves a much more silky finish and mouthfeel.

Despite the challenges of staying in business during a pandemic, BSC has been exceptionally productive with the release of numerous special edition products. This will be their fourth Post Epoch sold since the beginning of the year, and they most recently re-released a collaborative gin produced in a partnership with McClintock Distilling. Earlier this summer BSC also announced plans to build a new cocktail bar adjacent to their distillery in the Union Collective to be opened in 2021.

“I think that in many ways 2020 may have been our busiest year so far, which feels great considering we just celebrated our fifth anniversary,” said Max Lents, BSC co-founder and CEO. “We’re proud to be able to finish it off with a new and exciting version of our flagship product.”

Toasted Barrel Finish Post Epoch Rye Whiskey is available now for online pre-order and will be available in-person this Saturday at the BSC distillery, as well as for curbside pickup or via delivery through their website for $59.99. For more information or to place an order, visit baltimorespiritsco.com.