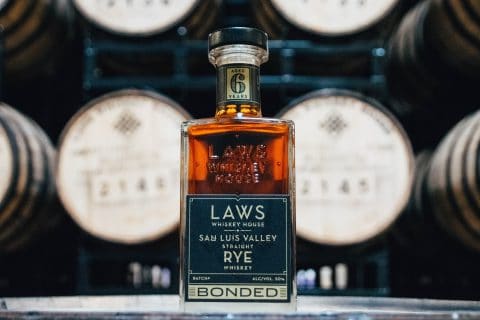 DENVER, Colo. — After a top-notch showing at the World Whiskies Awards in February where the Denver-based distillery was the category winner for American Rye Whiskey (12 years and under), Laws Whiskey House proudly released its 6-Year Bottled in Bond San Luis Valley Rye. This time-honored new whiskey will be available this month at premium retailers in California, Colorado, Illinois, New Jersey, New York and Texas.

“The world-class quality of our whiskey stems from the grains we get from the Cody Family Farm in Alamosa,” said distillery founder Al Laws. “The heirloom San Luis Valley rye varietal is a standout as it distills into a distinctive spirit that gets better every year.”

Colorado’s first-ever Bonded Rye Whiskey is now two years older. This rye expression was first released after aging four years, and Laws is now proud to present it again after two additional years of aging. It was crafted from Colorado Malting Company’s San Luis Valley rye grain harvested from a single season, shaped by Laws as the single distiller, and then aged in our federally-bonded rack house for six years. You will find sweet grass with honey on the nose, colling notes of wild mind and fennel, followed by deeper accents of sea salt, orange tea and brown sugar on the palate. It finishes with a rich and buttery mouthfeel, accompanied by tobacco notes.

Established in 2011, Laws Whiskey House is a purpose driven, grain to bottle whiskey distillery founded on the principle that the soul of its whiskey is comprised of the people who grow it, the people who make it, and the people who drink it. Using the traditional method of open-air, on grain fermentation, Laws’ whiskeys feature high altitude grown American mother grains and mountain spring water while aging in 53-gallon charred American oak barrels. With a collection of award winning whiskey, including several Bottled in Bond expressions, Laws Whiskey House invites you to visit their tasting room in Denver’s historic Gates neighborhood and enjoy the Laws experience. For more information visit www.lawswhiskeyhouse.com.