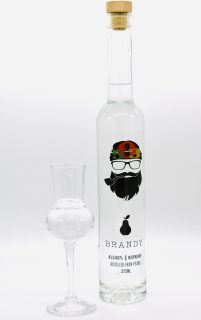 OREGON CITY, Ore.— Just in time for the holidays and the cold winter ahead, Oregon’s 503 Distilling has added three new products to its lineup of artisan spirits and ready-to-drink canned craft cocktails. The distillery has released Mt. Hood Old Fashioned in cans and Wildfire Cinnamon Rum and 503 Pear Brandy in bottles. All three products are available at the distillery—located at 275 Beavercreek Rd., Unit #C149—as well as select farmers markets, next day delivery in certain regions, and shipping within Oregon.

Mt. Hood Old Fashioned is the first in a series of small batch, full strength classic cocktails created in limited volumes and packaged in a two-pack of 200ml cans. 503 Distilling blended 95% rye whiskey with the perfect amount of bitters from The Bitter Housewife, along with Oregon filberts and Vermont maple syrup, delivering a 40 proof craft cocktail. Mt. Hood Old Fashioned is also available through select Oregon liquor stores and all Whole Foods in the state of Washington.

503 Distilling is releasing 375ml bottles of its Pear Brandy, which is fermented and distilled in the traditional Bavarian style—on the skins, single distillation—using Bartlett pears harvested by the distillery team in Hood River. The pears were immediately crushed and fermented, all during a level one wildfire evacuation notice this past September, for a final product that’s 80 proof.

503 Distilling is a small artisanal craft distillery in Oregon City, Oregon, that appreciates innovation and creativity. Located in the 503 area code, the company was founded in 2017 by three local longtime beverage industry professionals. 503 Distilling’s mission is to deliver unique spirit-based cocktails and handcrafted traditional spirits to the world.