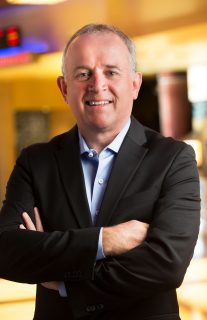 MINNEAPOLIS – Phillips Distilling Company, one of the most innovative and enduring independently-owned distilled spirits companies in the U.S., today announced the appointment of Andrew (Andy) England as Chief Executive Officer. England is a proven leader and highly accomplished executive with more than 30 years of experience across roles in Marketing, Operations and General Management in consumer-facing businesses. His appointment is effective August 10, 2020.

Most recently, England served as Chief Executive Officer and Director at National CineMedia (NCM).   NCM (Nasdaq:NCMI), a public company, is the leading seller of Cinema Media in the U.S. and helps brands get in front of the movies that shape the national conversation.  At NCM, England recreated the pre-show under the Noovie brand, built the company’s data and digital capability and business, and reset the cost structure.

Prior to that, England was Executive Vice President and Chief Marketing Officer of MillerCoors, LLC.  During his nearly 10-year tenure at MillerCoors, a $7.5 billion net revenue U.S. joint venture (now the US division of Molson Coors Beverage Company), England built new brand architecture, led a 200-person marketing and strategy department, revamped the go-to-market approach for classic brands such as Coors Light and Miller Lite, broadened the Company’s reach in social and digital media, and created sponsorship deals with major sports franchises that allowed MillerCoors to compete effectively in a rapidly fragmenting media marketplace. Specifically, England architected bold strategies that led Coors Light to be the #2 share brand in beer, overtaking Budweiser. He also significantly increased innovation resources that resulted in quadrupling the size of Blue Moon, and the very successful launch of Redd’s Apple Ale, and drove multiple strategic plans that exceeded profit goals every year.  England’s success operating through a three-tier system and driving growth through distributor networks will be particularly relevant to Phillips Distilling Company.

Prior to MillerCoors, England held increasing marketing and general management roles at The Hershey Company, OpenTable, Nabisco and Cadbury Schweppes.

England received his undergraduate degree, in Engineering Science, from Durham University in the U.K. and an MBA from Stanford University.

As CEO, England will oversee the continued growth and expanded distribution of celebrated spirits brands within the Phillips Distilling Company branded portfolio, including Prairie Organic Spirits,  UV Vodkas, Revel Stoke Whiskies, Phillips Spirits, and Douglas and Todd Small Batch Bourbon. England will also be charged with building upon the company’s legacy of innovation and industry firsts, which include the creation of America’s first schnapps in the 1930s, the introduction of flavored vodka in the 1950s, flavored whiskey in the early 2000s, and leadership in the organic spirits category through the launch of Prairie Organic Spirits in 2008.

Additionally, England will lead the company’s private label efforts under the Distiller Sales Company and continue to expand the company’s contract manufacturing business based in Princeton, Minn.

“After an extensive search, we are delighted to welcome Andy England as our new CEO,” said Brad Johnson, Principal Shareholder and Chair of Phillips Distilling Company. “We believe Andy’s established track record and breadth of business experience in expanding distribution while delivering growth and returns are critical to lead our business. His strategic leadership and proven ability to identify opportunities for development will ensure Phillips Distilling continues to be a leading innovator in the spirits industry.”

“This is an extraordinary time in the marketplace. I am excited for the opportunity to join a company that has been producing some of America’s most celebrated spirits for over a century,” said England. “The company’s focus on leading with innovation while continuing to grow its strong existing portfolio of spirits will allow me to build upon my past experience to help take the company to the next level.”

Phillips Distilling Company is one of the most innovative and enduring distilled spirits companies in the U.S. Since 1912, Phillips Distilling has been producing high-quality products using only the finest ingredients, sourced from around the world. From America’s first schnapps in the 1930s, to flavored vodka in the 1950s, to launching the first “Enjoy in Moderation” campaign in 1975, and leading the way in flavored whiskey and organic spirits in the 2000s, Phillips is consistently a pioneer in the spirits industry. The Phillips portfolio includes UV Vodka, Prairie Organic Spirits, Revel Stoke Whiskies, Phillips Spirits, Trader Vic’s Rums, Douglas and Todd Small Batch Bourbon, and Tomatin Single Malt Scotch. Phillips Distilling Company is based in Minneapolis and Princeton, Minn. phillipsdistilling.com