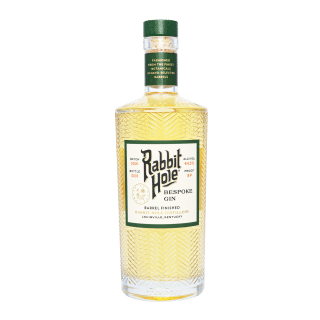 Rabbit Hole Bespoke Gin marks the first new product outside of the American whiskey space for the rapidly-growing, Kentucky-based spirits brand. “Bespoke Gin” will begin rolling out at retail nationally in mid-April.

Kaveh Zamanian, Rabbit Hole’s CEO, founder and whiskey maker said, “I have always had a soft spot for gin and wanted to create my own, an expression that brings forth subtle nuances of rye against the backdrop of botanicals. Rabbit Hole Bespoke Gin is everything I wanted it to be and more. It’s a spirit that celebrates the opulence of traditional English gin and the enduring charm of Kentucky rye. One barrel, two distinct spirts, it speaks to our ongoing commitment to innovation.”

Rabbit Hole Bespoke Gin begins with a London Dry Gin, fashioned from the finest botanicals of angelica, coriander, juniper, lemon peel, licorice, orange peel and orris root. Rabbit Hole imports the gin to its urban Distillery in Louisville, Kentucky, where the liquid is left to rest for 9 to 12 months, in the very same #3, wood-fired, toasted and charred new American Oak barrels that Kaveh and his team use to age its Kentucky Straight Rye whiskey. The spirit emerges from the barrels with a distinctively golden hue and notes of citrus, honeysuckle and elderflower with a hint of nutmeg. On the palate, lemongrass is prevalent, with a creamy mouth feel. The finish cascades into honey and ginger.

Kaveh continued, “To fully experience Rabbit Hole Bespoke Gin, I encourage imbibers to let go of every pre-conceived notion they have about London Dry Gin and let the aroma and complexity of the spirit take over. Whether enjoyed on the rocks, or in a classic cocktail, Rabbit Hole Bespoke Gin is a shining example of what a barrel-aged gin should be.”

Rabbit Hole Bespoke Gin is presented in sequentially hand-numbered bottles that give a nod to the world-class tailors of London’s Saville Row. The glass is embossed with an eye-catching herringbone pattern and the shoulders of the bottle are prominent. Tactile gold treatments appear subtly throughout the presentation, alongside pale green elements that are reminiscent of the verdant branding on Rabbit Hole Boxergrail Kentucky Straight Rye Whiskey. A bar-top cork features a gold coin emblazoned with a bold message, “Beholden to No One” which invites imbibers to blaze their own trails, just as Kaveh Zamanian did when he founded Rabbit Hole.