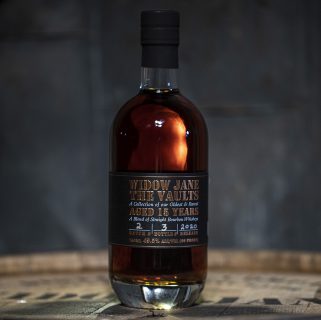 RED HOOK, BROOKLYN, NY – Widow Jane Distillery has announced the release of The Vaults 2020, the follow up to the brand’s wildly successful 2019 debut expression in The Vaults collection. SRP is $199/750 ml.

The 2020 release is a marriage of 15-17 year-old Tennessee and Indiana bourbons from barrels hand-picked from the Widow Jane rick house stocks on Conover Street in Red Hook, Brooklyn and meticulously blended, rested, and finished by Widow Jane president, distiller, and blender Lisa Wicker. Just over 5,000 bottles of The Vaults 2020 are being released to the public in select markets. At 49.5% ABV (99 proof), The Vaults 2020 is every bit as robust as its 2019 predecessor.

The Vaults collection is intended to share a wide intensity of flavors from selected old bourbons finished in the most fascinating and original woods. The 2020 edition is a blend of 15-17 year old bourbons, which Wicker and her team finished in rare casks raised from five-year air-seasoned Appalachian oak. The cask finish imparts rich and deep flavors, and allows the discerning drinker to discover hints of dark sugar and unsweetened vanilla. Extended air seasoning is a technique that virtually eliminates tannins and greenness in the wood staves yielding a mellow flavor profile influenced by the passing seasons that is impossible to replicate.

As with all Widow Jane whiskeys, like their signature 10 Year-Old Bourbon, The Vaults is non-chill filtered and proofed with the pure limestone mineral water from the legendary Rosendale Mines of New York, just 100 miles north of the distillery, which contributes to the unique mouthfeel and long finish.

Said Wicker, “Working with exceptional whiskey is remarkable. Every barrel has a distinct personality, and blending them into an expression that is undeniably Widow Jane has resulted in a really special Bourbon I’m excited to share with our fans.”

Widow Jane is an award-winning artisanal distillery located in the New York City neighborhood of Red Hook, Brooklyn. The company is named in homage to one the legendary mines of Rosendale in Upstate New York that produced the natural cement used to construct the Brooklyn Bridge and the Empire State Building, among many other iconic American landmarks. The pure, limestone-filtered water from the mine, plus one of the country’s largest holdings of long-aged Bourbons, and a refusal to compromise the product with chill-filtration, are just three elements that make Widow Jane a stand-out whiskey company.