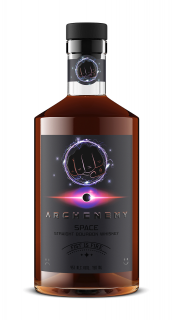 Archenemy Space Whiskey is an even blend of two straight bourbon lots distilled in Indiana and bottled in California by Lost Republic Distilling Co. The first distilled in June 2012 and the second in August of 2015 — stored in traditional 53-gallon white oak barrels with a #2 char, and unfiltered to preserve all the color and flavor.

The resulting finished bourbon has a medium amber color. The nose has a woody oak aroma with dark raspberries and clove notes. The palate is full of vanilla, caramel, toffee and a clove/cinnamon punch. The finish is lingering butterscotch with cinnamon and spearmint.

“Everything we do is with the Legion M community of fans and creatives in mind. It seemed like a logical next step to bring the Space Whiskey fromArchenemy to life. We wanted the flavor of this bourbon to pack a powerful punch, channeling the cosmic themes of the film to create a blend that seems otherworldly.” said Legion M co-founder and CEO, Paul Scanlan.

The film,Archenemy, which stars Joe Manganiello and released on December 11, 2020, follows Max Fist (Manganiello), a local drunk who claims to be a superhero from the planet Chromium. He tells anyone who will listen that he was pulled into a wormhole, falling through time and space, and dropped to earth without any of his powers. No one pays any attention to Max except a teenager named Hamster (Skylan Brooks) who can’t get enough of Max’s stories. When Hamster and his sister (Zolee Griggs) get in trouble with a vicious drug syndicate led by The Manager (Glenn Howerton), Max takes to the streets as a brutal vigilante hellbent on proving himself as the hero no one believes him to be.

Legion M, the world’s first fan-owned entertainment studio, is revolutionizing the way entertainment is made in Hollywood by uniting a growing community of 130,000+ members including more than 25,000 investors. Through its fan-owned business model, Legion M is working on a diverse slate of original television and film projects in various stages of development that includes the epic fantasyThe Emperor’s Blades, Ghosts of Manhattan, comic book and feature film Girl With No Name, Evermor, Airship Cowboys, and Malice, as well as interactive and VR-based projects, including ICONS: Face to Face starring Kevin Smith and the late Stan Lee.

Legion M and its community of fans have also produced high-profile events honoring some of the industry’s biggest names, including the Stan Lee hand and footprint ceremony at Hollywood’s TCL Chinese Theatre in 2017.