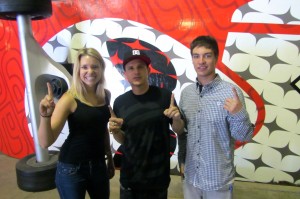 CORONA, Calif.–(BUSINESS WIRE)–After three months of online entries, thousands of Facebook votes and head-to-head projects with the Final 8 contestants, Monster Energy’s search for the Ultimate Intern is complete. Laura Golly, 20, from Naples, Fla. and Blake Anderson, 21, from Glenmoore, Pa. have won the coveted titles of Monster Energy Ultimate Intern, announced by Monster Energy personality Rob Dyrdek at his Los Angeles-based Fantasy Factory during the competition’s final event day. The Monster Energy Ultimate Intern Search began April 9, 2012, during which time nearly 2,000 candidates submitted online applications with one-minute videos showcasing why they should be considered for the important internships never before offered by the global energy drink company.

As host of the final day of competition between the Final 8 contestants, legendary skateboarder and television host Dyrdek addressed the finalists, “Each of you created an incredible video just to get here. I am blown away by your creativity and drive, and amazed by the work you each did. Unfortunately, only two of you can come away as winners, but it’s been incredibly inspiring to have met each of you, and I have no doubt great success awaits all of you.”

Laura and Blake assumed their two-month internship beginning on June 25, 2012 and running through August 24, 2012. Each winner will rotate in various positions at Monster Energy, including participation at the X-Games 18, the Vans Warped Tour 2012, and the Street League DC Pro Tour Fueled by Monster Energy. They will often be working with professional athletes and entertainers who are sponsored by Monster Energy, and other company representatives and partners. Winners will be exposed to various parts of the business and are responsible for creating and posting social media content about their experiences and provide unique insights into emerging consumer trends. The compensation package for each intern is worth an estimated $15,000.

Sam Pontrelli, senior vice president of marketing for Monster Energy, stated, “We were really impressed by all eight finalists. I wish we could have hired them all, but Laura and Blake really nailed the challenges. It will be great to have them as part of the Monster Crew this summer. We want to thank our partners Skullcandy, DC, JVC, Team Losi Racing and Horizon Hobbies for their partnership and support through this fantastic process.”

The Final 8 contestants participated in a week-long series of projects at Monster Energy’s Corona, Calif. headquarters, including being introduced to the culture of Monster Energy by visiting Pro Circuit Racing international with legendary Mitch Payton and taking in a stunt bike show with Monster’s Jason Britton. They observed Jeremy “Twitch” Stenbrerg, Nate Adams, and Josh Hansen practice for the upcoming X-Games and interviewed the riders as part of their project. Their goal was to create a media kit around Twitch, Nate, and Josh for their competition in X-Games. They were required to pick a new athlete or celebrity for Monster to sponsor and they also had a choice of coming up with a can/product design or a athlete shirt design. They presented their projects to the Monster Energy team. The finalists then had to present their projects to Rob Dyrdek at Fantasy Factory, who chose the winners.