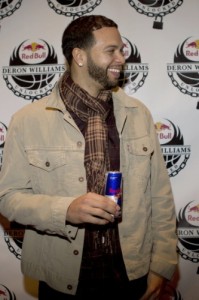 NEW YORK, Jan. 3, 2012 /PRNewswire/ — While East Coast winds may have played games with New Jersey Nets point guard Deron Williams’ scheduled helicopter ride recently, the Olympic Gold Medalist still earned his wings.  Following a Nets home game, Williams was supposed to take to the air in a Red Bull “Heli” from New Jersey to New York to host an NBA season kick-off party.  But with 30 mph gusts having something to say about it, he instead flagged down a Military Extreme Vehicle (MXT) and zipped through Newark into Manhattan’s SoHo District to join the party.

With guests including rappers Jim Jones and Prodigy of Mobb Deep, Williams officially joined the Red Bull family with a night he likely won’t ever forget.  A web video documenting every moment from the time he left the Prudential Center to the moment the party closed down can be viewed at www.redbullusa.com/deronwilliams. An embed code is also available on the page.

“Even though the original plan of checking out the skyline from a heli didn’t go as planned, it was an incredible night out,” said Williams.  “I had a fun ride into Manhattan, and my friends at Red Bull threw a great party to welcome me to the family.”

Heralded as one of basketball’s best point guards, the 27-year old is a two-time NBA All-Star and gold medal winner.  The third overall pick in the 2005 NBA Draft, Williams was taken out of the University of Illinois where he led the team to the national championship game.