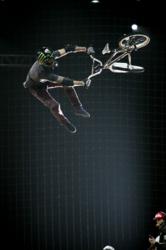 28 Monster Athletes will be competing this weekend across Skate, Moto, BMX, Surf and Rally Events.

Foz Do Iguaçu, Brazil – Corona, Calif (PRWEB) April 18, 2013 — This week Monster Energy’s team of world-class athletes converge in Brazil for the first-ever X Games Foz Do Iguaçu 2013. A total of 28 Monster Energy athletes have earned coveted invites to the historic event, which gets underway Thursday, April 18 and runs through Sunday, April 21.

This year X Games has gone global, with a total of six events all over the world. Winter events in Aspen and Tignes have already gone off, and the traditional summer events are now slated for Foz Do Iguaçu, Brazil; Barcelona, Spain; Munich, Germany; and the usual Los Angeles Calif. in 2013.

Check out Monsterenergy.com for a full athlete list. Highlights Include:

In BMX, leading the pack for Monster Energy will be Jamie Bestwick, competing once again in BMX Vert. He’s earned a record six straight golds in the event, with 10 career golds and twelve overall—he’s nothing short of the man to beat with Vince Byron right behind him.

Street League Skateboarding joins forces with X Games for this inaugural event, bringing authentic street skateboarding to X competition. Monster Energy has the field stacked, including Nyjah Huston, Chris Cole, Shane O’Neill, Peter Ramondetta, and Ishod Wair. There’s no denying Huston’s domination in competition—from Street League events to X Games, he seems to win them all—also keep a look out for Cole and the rest of Monster crew who are more than capable of taking gold and hitting the podium.

Pierre Luc Gagnon (PLG) is back to stack more gold in Skateboard Vert. A four-time Gold Medalist on the vert ramp, he’s the defending Gold medalist in the event. A ruthless trainer with a tireless work ethic, PLG has been preparing hard for Brazil and is out for nothing short of first place.

In Skateboard Big Air, the always-exciting Jake Brown will be charging the massive mega ramp gap and quarterpipe as he looks to medal again after two-straight Golds in ’09 and ’10.

Representing Monster Energy in Rally Cross will be Liam Doran and Ken Block, who took the silver last year in Los Angeles after pushing strong through a crash and flat tire. They’ll both be looking for the gold as the finals go down Sunday.

In Moto X Best Whip, Jeremy “Twitch” Stenberg has taken Gold two years straight and will be in Brazil for more this weekend. A crowd favorite, Twitch goes huge, throwing his bike around with authority – expect tons of excitement in this event.

Look out for Taka Higashino in Moto X Freestyle, the defending gold medalist in the event. With an arsenal of highly technical, stylish tricks including the rock solid backflip, the maneuver that clinched gold for him last year at X in Los Angeles.

In BMX Park expect more hardware from Scotty Cranmer—he took gold last year in dominant fashion, and will be out to add to his already impressive medal count of six medals. Make sure to also look out for young gun Pat Casey who just dropped a new video filmed at his private facility on his new ramp.

BMX Dirt makes its return to X Games and Monster has two of the best in the business with Kyle Baldock and Ben Wallace.

In Real Surf, head to expn.com to check out the video parts from Dion Agius and Chippa Wilson. They both submitted 90-second edits to a panel of judges who ultimately select the winners. Dion and Chippa are two of the most progressive surfers in the game and pulled off creative and futuristic surfing for this Real Surf video submission contest. Expectations are high for double medals.

Visit monsterenergy.com for more on the team’s amazing weekend at X Games Foz Do Iguaçu 2013, including tons of behind-the-scenes updates and exclusive photos.