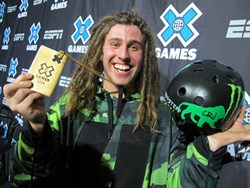 ASPEN, Colo. — Officially sponsoring X Games for the first time, Monster Energy is proud to announce its team of world-class athletes ready for battle this week at X Games Aspen 2014. All the action gets underway January 23-26 with competition spreading across snowboard, ski, and snowmobile events.

The Monster team is ready, with a huge number of riders earning coveted invites. Key athletes and events to watch out for include:

Iouri “I-Pod” Podladtchikov will be looking for nothing less than the top of the podium in Men’s Snowboard SuperPipe. At X Games Tignes he made history by landing the first ever Cab double cork 1440. Since then both he and his competitors have been upping their game and training hard—the event should be thrilling.

Joining I-Pod on the SuperPipe will be Christian Haller, Taylor Gold, and Japanese phenoms Kazuhiro Kokubo and Ayumu Hirano. Hirano, just 14 years old at the time, surprised the world and became the youngest ever to earn a Winter X medal when he took the silver in Superpipe at X Games Aspen last year—he’s only going bigger and gotten better in the last year.

Kaitlyn Farrington will represent Monster Energy in Women’s Snowboard SuperPipe. A constant podium threat, her track record includes silver in Aspen in 2011, gold at the first X Games Europe in 2010, and the 2012 Grand Prix title.

In Women’s Snowboard Slopestyle, Jamie Anderson and Silje Norendal will once again hold it down. Anderson has won in incredible eight slopestyle medals, including three gold (’08, ’12, ’13). Norendal is a huge contender too, with the Norwegian winning slope at X Games Tignes 2013 in one of the most hotly contested finals in women’s slopestyle history.

In Men’s Snowboard Slopestyle, the field is full of Monster Energy athletes: Sage Kotsenburg, Alek Ostreng, and Halldor Helgason will all be looking for medals to take home.

Snowboard X is back, and so is Nate Holland. In 2012 the Monster Energy athlete backed up his five straight golds in the event (2006 -2010) with another gold. Bets are high he’ll be looking to add a seventh gold to his collection in Aspen.

In Real Snow, an event that puts video parts head to head, look out for Dylan Thompson and Bode Merrill. Both are coming in hot with bonzes at last year’s X (Merrill for Real Snow; Thompson for Street).

On the ski side of competition, look out for the stacked field in Men’s Ski Slopestyle including Henrik Harlaut, Tom Wallisch, James Woods, Alex Schlopy, Alex Beaulieu-Marchand, and Jossi Wells. The crew’s successes at X have been considerable: Harlaut bagged two medals at X Games Aspen last year (Big Air Gold and Slopestyle Silver, Woods took the Bronze in Slope in Aspen, and Wells took a clutch Silver in Slope at X Games Tignes last year.

In Women’s Ski Slopestyle, young riders Devin Logan and Maggie Voisin will hold it down for Monster Energy.

In Ski SuperPipe, David Wise and Kevin Rolland return to the pipe with the confidence of a silver and bronze respectively at X Games Tignes. Both are highly technical and clean riders, so look for big things from them as well as their teammates Justin Dorey and Aaron Blunck. On the women’s side of Skiing SuperPipe, look out for Brita Sigourney and Devin Logan (alt).

In Real Ski, Parker White will be looking to back up his bronze in the video part based event from last year. His teammate Jacob Wester will also produce a part in his campaign for an X Games medal.

In Snowmobile Freestyle, Heath Frisby, Joe Parsons, and Cory Davis will be back to dominate again. All have insane records at X, including medals for all three across snowmobile events last year. Parsons and crew always seem to bring new tricks to this event, so watch out.

The new Snowmobile Long Jump event should be exciting with Heath Frisby, Joe Parsons, Cory Davis, and Chris Burandt flying high (and long) for the gold.

In Snocross, Tucker Hibbert’s dominance is undeniable thanks to his six-straight golds in the event—last year he won by a huge 11-second margin. He’ll be joined on the course by young Wisconsin native, Kody Kamm.

Visit http://www.monsterenergy.com and http://facebook.com/monsterenergy next week to score all the exclusive updates from X Games Aspen 2014. The sites will see an unprecedented level of coverage throughout the event, including exclusive photos, videos, behind the scenes coverage, and contest results as they happen.