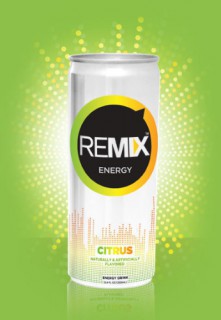 NEW YORK, May 21, 2015 /PRNewswire/ — In May 2015, the REMIX brands will launch their first non-alcoholic carbonated beverage in the energy drink category.  REMIX Energy will debut its first flavor, a unique bold Citrus profile, in an 8.4-ounce can, with plans on the horizon to debut additional proprietary flavors and a 16-ounce offering.

“I’m excited to evolve REMIX into the energy space,” states Paul “DJ Pauly D” DelVecchio, REMIX partner, “My fans and our REMIX Cocktails customers love and appreciate that REMIX celebrates music, nightlife and all things social.  They were asking for a beverage that would “fuel” all aspects of their lives from work to play; gym to club; concert to music festival.  Here it is!”

For more information, as well as where to purchase, please go to www.energybyremix.com.

About DJ Pauly D
Ranked on Forbes Magazine’s “World’s Highest Paid DJs” list for two consecutive years and voted one of VIBE Magazine’s “Top 6 DJs Who Rocked 2011,” DJ Pauly D continues to be one of the world’s most sought after DJs. Pauly has toured with Britney Spears, Nicki Minaj, the Backstreet Boys and Jesse McCartney and currently holds DJ residencies in Las Vegas at Rehab Pool at the Hard Rock Hotel & Casino and at Harrah’sAtlantic City. His eclectic track selection, incomparable style and infectious personality continue to captivate crowds around the globe leaving them fist pumping all night. In January 2013, he released the single, “Back To Love” featuring Jay Sean, which climbed to number four on the iTunes Dance Chart in less than 24 hours. Pauly has also developed a full range of headphones with 50 Cent and SMS Audio, created a ready to drink cocktail line, REMIX Pre-Game Cocktails and has a collection of tanning products with Devoted Creations. Most recently, Pauly has been featured on “Extra” as their special correspondent interviewing celebrities suchBritney Spears, Pitbull and Giada De Laurentiis in Las Vegas, where he currently resides.