NEW YORK, Nov. 2, 2015 /PRNewswire/ — Love coffee but hate the hassle?  You’re not alone. Whether you are commuting, cramming for an exam or catching up with friends, coffee has become an essential food group. Now, fueled by a successful appearance on ABC’s Shark Tank and support from local investors, HOTSHOT® – the innovation that makes delicious HOT coffee instantly available – is ready to launch.

HOT coffee in a ready-to-drink can is not a new concept — in fact in Japan, it is a $15B industry. Entrepreneur Danny Grossfeld was on a trip to Japan when he reached into what he thought was a cooler to grab a can of iced coffee. Much to his surprise, the can was HOT– and ready to drink. Grossfeld launched a Kickstarter campaign to bring a version of the Japanese product to U.S. consumers, which caught the eye of Shark Tank producers. 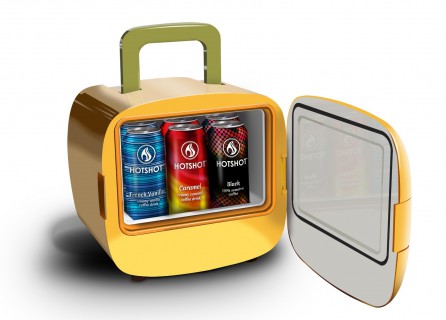 “Gearing up for my Shark Tank appearance was one of the most stressful times of my life,” said Grossfeld. “But the experience was also invaluable as I had to anticipate the Sharks’ questions and make sure my business plan was flawless. I have to say it was one of the greatest experiences of my life.”

While Grossfeld didn’t get an initial deal, pre-show visibility helped secure private investment and Shark Mark Cuban offered a test placement in his movie theaters. “Initial response to the segment has been phenomenal,” said Grossfeld. “Phone and web pre-orders are streaming in and in two days since the show aired, I have received more orders than in 45 days on Kickstarter.”

Initially available in Espresso, Caramel, Vanilla Frappe and Hot Chocolate, the coffee (made from 100% Arabica beans grown inSumatra) is served in aluminum cans (made of 70% recycled content) that are warmed to 140 degrees by a custom-designed HOT “fridge.” When opened, the cans emit steam and the fresh-brewed aroma expected from a delicious cup of coffee.  Additional flavors, are planned.

Pre-orders are being taken for starter kits, consisting of a hot box, plus 12 8-ounce cans of assorted flavors ($69.99). Replacement 12-can packs are available for $26.99. Kits are also available for retail.  Product will be delivered in January.

For additional information, check us out on Facebook or www.drinkhotshot.com. Hi- res images are available.